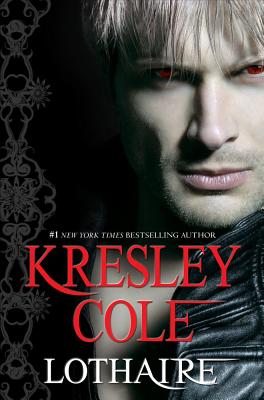 
From the humblest of beginnings a millennia ago, Lothaire the Enemy of Old rose to power, becoming the most feared and evil vampire in the immortal world. Driven by his past, he will not rest until he captures the vampire Horde’s crown for himself. The discovery of his Bride, the female meant only for him, threatens to derail his plot.
Elizabeth Peirce is a mere mortal, a glaring vulnerability for a male with so many blood foes bent on annihilating anything he desires. Yet soon he discovers his Bride’s secret. A magnificent power dwells inside the fragile human, one that will aid his quest. But to possess that power, he will have to destroy her. Will Lothaire succumb to the torments of his past, or seize a future with her?

Kresley Cole is the #1 New York Times bestselling author of the Immortals After Dark paranormal series and the young adult Arcana Chronicles. Her books have been translated into over twenty foreign languages, garnered three RITA awards, and consistently appear on the bestseller lists in the US and abroad. Before becoming a writer, Cole was a world-ranked athlete, coach, and graduate student. She has traveled over much of the world and draws from those experiences to create her memorable characters and settings. She lives in Florida with her family and “far too many animals,” and spends any free time traveling. You can learn more about her and her work at KresleyCole.com or Facebook.com/KresleyCole. Sign up for Kresley’s email newsletter to receive the latest book release updates, as well as info about contests and giveaways (KresleyCole.com/Newsletter).
Loading...
or
Not Currently Available for Direct Purchase