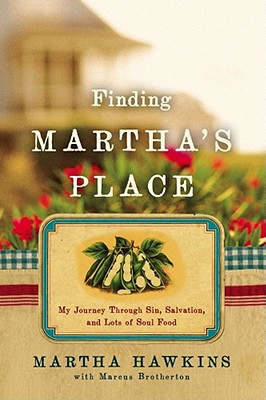 My Journey Through Sin, Salvation, and Lots of Soul Food

Martha Hawkins was the tenth of twelve children born in Montgomery, Alabama. There was no money, but her childhood was full of love. Martha's mother could transform a few vegetables from the backyard into a feast and never turned away a hungry mouth.

Memories of the warmth of her family's supper table would remain with Martha. Even as a poor single mother without a high school diploma, Martha dreamed of one day opening a restaurant that would make people feel at home. She'd serve food that would nourish body and soul. But time went by and that dream slipped further and further away as Martha battled the onset of what would later become a severe mental illness.

But the thing about hitting bottom is that there's nowhere to go but up. Martha decided to step into God's promise for her life. Her boundless faith and joy led her to people who would change her world and lend a helping hand when she most needed and least expected one.

Martha's Place is now a nationally known destination for anyone visiting the Deep South and a culinary fixture of life in Montgomery. Martha only hires folks who are down on their luck, just as she once was. High-profile politicians, professional athletes, artists, musicians, and actors visit regularly. Martha has proven many times that keeping the faith makes the difference between failure and success.

This is the story of how Martha finally found her place. . . .

Praise For Finding Martha's Place: My Journey Through Sin, Salvation, and Lots of Soul Food…

"We knew Martha Hawkins was special the moment we met her. Her faith, her resilience, and her passion to care for others are remarkable. If you want to be inspired, this is your story." -- Doug McMillon, president and CEO of Walmart International

"The reader's attention is captured immediately by the harsh realities of her beginnings. The heart is moved as one senses her struggles; rejoices in her finding spiritual life and, thus, God's direction; and then ponders at what might yet be accomplished in the untold future of this marvelous woman. A captivating story of God's grace." -- Jerry Burden, executive director, The Gideons International

"Martha Hawkins invites us into her kitchen for some heaping helpings of a life story full of pain and adversity that she transformed into a story of hard work, willpower, prayer, change, and hope. With a little help and a few open doors, Martha transformed her life and has whipped up a delicious memoir that drips with tasty Southern idiom and goes down so easy you will want to come back for a second helping. Soul food is her medium, prayer and faith her support, and hope is her message. You can't help but love the menu." -- Raymond C. Offenheiser Jr., president, Oxfam America

"When you read Martha Hawkins's story, you'll be praising the heavens that this great soul food cook fought her way through hardship, pain, and mental illness to establish her restaurant. You'll come away inspired, sanctified, and hungry for a seat at her table." -- Donna Florio, Southern Living

Martha Hawkins was born the tenth of twelve children in Montgomery at the height of the Civil Rights Movement, and she overcame poverty and mental illness to become a successful restaurateur and inspirational speaker. Today, her restaurant “Martha’s Place” is a nationally-known stop for anyone who visits the Deep South and is a culinary fixture of life for Montgomery residents. Her cooking, restaurant, life story, and inspirational words have been featured in many national publications including The New York Times, Oprah Magazine, Southern Living, Essence, and Guideposts.