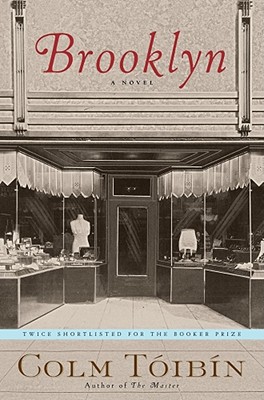 From the award-winning author of The Master, a hauntingly compelling novel—by far Tóibín’s most accessible book—set in Brooklyn and Ireland in the early 1950s about a young woman torn between her family in Ireland and the american who wins her heart.

Eilis Lacey has come of age in small-town Ireland in the years following World War Two. Though skilled at bookkeeping, Eilis cannot find a proper job in the miserable Irish economy.

When an Irish priest from Brooklyn visits the household and offers to sponsor Eilis in America—to live and work in a Brooklyn neighborhood "just like Ireland"—she realizes she must go, leaving her fragile mother and sister behind.

Eilis finds work in a department store on Fulton Street, and studies accounting at Brooklyn College, and, when she least expects it, finds love. Tony, a blond Italian, slowly wins her over with persistent charm. He takes Eilis to Coney Island and Ebbets Field, and home to dinner in the two-room apartment he shares with his brothers and parents. Eilis is in love. But just as she begins to consider what this means, devastating news from Ireland threatens the promise of her new life.

With the emotional resonance of Alice McDermott’s At Weddings and Wakes, Brooklyn is by far Tóibín’s most inviting, engaging novel.

Praise For Brooklyn: A Novel…

"A beautifully rendered portrait of Brooklyn and provincial Ireland in the 1950s... Toibin writes about women more convincingly, I think, than any other living, male novelist." -- Zoe Heller, author of The Believers

"[A] masterly tale... There is not a sentence or a thought out of place." -- Irish Times

"Toibin's prose is as elegant in its simplicity as it is complex in the emotions it evokes." -- The New York Times Magazine

"Reading Tóibín is like watching an artist paint one small stroke after another until suddenly the finished picture emerges to shattering effect." -- The Times Literary Supplement (U.K.)

Colm Tóibín is the author of nine novels, including The Blackwater Lightship; The Master, winner of the Los Angeles Times Book Prize; Brooklyn, winner of the Costa Book Award; The Testament of Mary; and Nora Webster, as well as two story collections, and Mad, Bad, Dangerous to Know, a look at three nineteenth-century Irish authors. He is the Irene and Sidney B. Silverman Professor of the Humanities at Columbia University. Three times shortlisted for the Man Booker Prize, Tóibín lives in Dublin and New York.
Loading...
or support indie stores by buying on