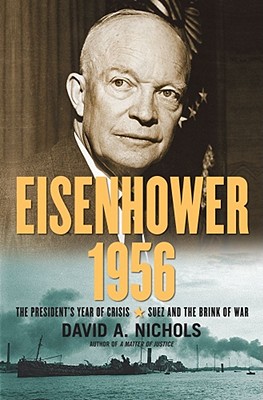 The President's Year of Crisis--Suez and the Brink of War

A gripping tale of international intrigue and betray-al, Eisenhower 1956 is the white-knuckle story of how President Dwight D. Eisenhower guided the United States through the Suez Canal crisis of 1956. The crisis climaxed in a tumultuous nine-day period fraught with peril just prior to the 1956 presidential election, with Great Britain, France, and Israel invading Egypt while the Soviet Union ruthlessly crushed rebellion in Hungary.

David A. Nichols, a leading expert on Eisenhower’s presidency, draws on hundreds of documents declassified in the last thirty years, enabling the reader to look over Ike’s shoulder and follow him day by day, sometimes hour by hour as he grappled with the greatest international crisis of his presidency. The author uses formerly top secret minutes of National Security Council and Oval Office meetings to illuminate a crisis that threatened to escalate into global conflict.

Nichols shows how two life-threatening illnesses—Eisenhower’s heart attack in September 1955 and his abdominal surgery in June 1956—took the president out of action at critical moments and contributed to missteps by his administration.

In 1956, more than two thirds of Western Europe’s oil supplies transited the Suez Canal, which was run by a company controlled by the British and French, Egypt’s former colonial masters. When the United States withdrew its offer to finance the Aswan Dam in July of that year, Egypt’s president, Gamal Abdel Nasser, nationalized the canal. Without Eisenhower’s knowledge, Britain and France secretly plotted with Israel to invade Egypt and topple Nasser.

On October 29—nine days before the U.S. presidential election—Israel invaded Egypt, setting the stage for a “perfect storm.” British and French forces soon began bombing Egyptian ports and airfields and landing troops who quickly routed the Egyptian army. Eisenhower condemned the attacks and pressed for a cease-fire at the United Nations.

Within days, in Hungary, Soviet troops and tanks were killing thousands to suppress that nation’s bid for freedom. When Moscow openly threatened to intervene in the Middle East, Eisenhower placed American military forces—including some with nuclear weapons—on alert and sternly warned the Soviet Union against intervention.

On November 6, Election Day, after voting at his home in Gettysburg, Ike rushed back to the White House to review disturbing intelligence from Moscow with his military advisors. That same day, he learned that the United Nations had negotiated a cease-fire in the Suez war—a result, in no small measure, of Eisenhower’s steadfast opposition to the war and his refusal to aid the allies.

In the aftermath of the Suez crisis, the United States effectively replaced Great Britain as the guarantor of stability in the Middle East. More than a half century later, that commitment remains the underlying premise for American policy in the region.

Historians have long treated the Suez Crisis as a minor episode in the dissolution of colonial rule after World War II. As David Nichols makes clear in Eisenhower 1956, it was much more than that.

Praise For Eisenhower 1956: The President's Year of Crisis--Suez and the Brink of War…

“A staggering moment of peril, vividly captured by a gifted author. . . . A riveting and relevant analysis of a sequence of events that placed the great nations of the period at the brink of a world war. . . . A pioneer in the Eisenhower landscape . . . Nichols captures all of this with his trademark precision. . . . A splendid book.”

“A richly contextual reappraisal of a telling year in the presidency. . . . A suspenseful study that moves chronologically through the days in which the U.S. government was on tenterhooks. . . . A solid revisiting of this compelling leader about whom we are still learning.”

“David Nichols’ Eisenhower 1956 is magnificent, the definitive account of one of the most crucial years of Eisenhower’s presidency and of his most dangerous foreign crisis. Nichols’ rigorous use of primary sources is not only a model for historians, but it also makes for a superb read.”

“David Nichols’s book on Eisenhower’s momentous year is fresh and insightful—and powerful and exciting. The more we know about Ike’s subtle but masterful ability to keep the peace, the more we miss his kind in politics and government.”

“Eisenhower 1956 is a wonderfully suspenseful account of perhaps the most dangerous crisis of the Cold War, and demonstrates brilliantly how well Eisenhower handled it—despite the fact that he was recovering from a heart attack—employing deft diplomacy, a matchless sense of how to use America’s power, steely firmness even towards old friends and allies, and a strong sense of what was right, in the pursuit of peace.”
--Michael Korda, author of Ulysses S. Grant, Ike, and Hero

--Douglas Brinkley, Professor of History at Rice University and author of The Wilderness Warrior

“Eisenhower 1956 is the ultimate inside story of Ike’s exemplary leadership during the world’s first nuclear crisis. Surprisingly, it is also a riveting tale that reads like a suspense thriller, ending with a narrow escape from disastrous consequences.”
--Daun van Ee, editor, The Papers of Dwight David Eisenhower

“Eisenhower 1956 is a gripping account of Ike’s masterful handling of the Suez crisis. Set against the backdrop of the president’s two life-threatening illnesses, David A. Nichols’ penetrating examination of a potentially disastrous incident in the tinderbox of the Middle East reveals how Eisenhower’s decisive actions averted a deadly war and deterred the Soviet Union from intervening during some of the darkest days of the Cold War.”

—Carlo D’Este, author of Eisenhower: A Soldier’s Life and Patton: A Genius For War

David A. Nichols, a leading expert on the Eisenhower presidency, holds a PhD in history from the College of William and Mary. A former professor and academic dean at Southwestern College, he is the author of A Matter of Justice: Eisenhower and the Beginning of the Civil Rights Revolution; Eisenhower 1956: The President’s Year of Crisis; and Ike and McCarthy: Dwight Eisenhower’s Secret Campaign against Joseph McCarthy; as well as other books. He lives in Winfield, Kansas.
Loading...
or
Not Currently Available for Direct Purchase