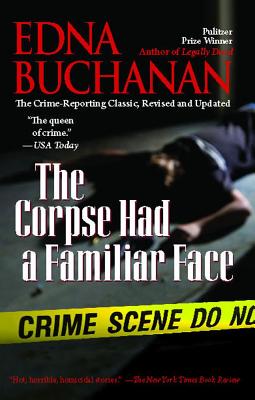 The Corpse Had a Familiar Face (Paperback)

Nobody covered love and lunacy, life and death on Miami’s mean streets better than legendary Miami Herald police reporter Edna Buchanan. Winner of a 1986 Pulitzer Prize, Edna has seen it all, including more than 5,000 corpses. Many of them had familiar faces.

Edna Buchanan doesn’t write about cops—she writes about people: the father who murdered his comatose toddler in her hospital crib; fifteen-year-old Charles Cobb—a lethal killer; Gary Robinson, who "died hungry"; the Haitian who was knitted to death in a Hialeah factory; and the naked man who threw his girlfriend’s severed head at a young cop who threw it back.

Edna Buchanan worked The Miami Herald police beat for eighteen years, during which she won scores of awards, including the Pulitzer Prize and the George Polk Award for Career Achievement in Journalism. Edna attracted international acclaim for her classic true-crime memoirs, The Corpse Has a Familiar Face and Never Let Them See You Cry. Her first novel of suspense, Nobody Lives Forever, was nominated for an Edgar Award.
or
Not Currently Available for Direct Purchase
Copyright © 2020 American Booksellers Association