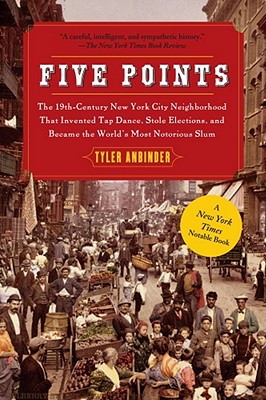 All but forgotten today, the Five Points neighborhood in Lower Manhattan was once renowned the world over. From Jacob Riis to Abraham Lincoln, Davy Crockett to Charles Dickens, Five Points both horrified and inspired everyone who saw it. While it comprised only a handful of streets, many of America’s most impoverished African Americans and Irish, Jewish, German, and Italian immigrants sweated out their existence there. Located in today’s Chinatown, Five Points witnessed more riots, scams, prostitution, and drunkenness than any other neighborhood in America. But at the same time it was a font of creative energy, crammed full of cheap theaters, dance halls, and boxing matches. It was also the home of meeting halls for the political clubs and the machine politicians who would come to dominate not just the city but an entire era in American politics.

Drawing from letters, diaries, newspapers, bank records, police reports, and archaeological digs, Anbinder has written the first-ever history of Five Points, the neighborhood that was a microcosm of the American immigrant experience. The story that Anbinder tells is the classic tale of America’s immigrant past, as successive waves of new arrivals fought for survival in a land that was as exciting as it was dangerous, as riotous as it was culturally rich.

"...spares no gritty detail in this recreation of this immigrants' hell on earth... -- The Washington Post Book World

"Tyler Anbinder has so thoroughly re-created Five Points that the stench of life there all but rises from the page." --New York Daily News


"Five Points has been brought back to life by Tyler Anbinder." --The New York Observer


"The author has performed a prodigious...feat of research, leaving no original or secondary source untouched...a solid work of scholarship that deserves a permanent place in any top shelf of urban history." --The Washington Times


"A colorful and useful look at a neighborhood which captures the melting pot at its best and worst." --Irish America


"[A] fascinating book...Five Points provides absorbing material for anyone interested in our collective past or who loves a good human interest story." --Sun Sentinel

"One upon a time, the Five Points was New York's most infamous neighborhood, singled out by generations of reformers and journalists as a hive of nightmarish squalor, violence, disease and crime. But as Tyler Anbinder shows in this compelling challenge to the conventional wisdom, the Five Points slum--bad as it was--was never quote so bad as outsiders wanted it to be. A first-rate history, meticulously researched and populated by an amazing cast of characters." --Edwin G. Burrows, coauthor of Gotham: A History of New York City to 1898, winner of the Pulitzer Prize

“New York City is the capital of the world right now, and much of its greatness traces back to certain very old neighborhoods, which trace back to an even older neighborhood, whose name, nearly forgotten today, was Five Points. Here is the history of that neighborhood.” –Paul Berman, author of A Tale of Two Utopias: The Political Journey of the Generation of 1968.

Tyler Anbinder is a professor of history at George Washington University. His first book, Nativism and Slavery, was also a New York Times Notable Book and the winner of the Avery Craven Prize of the Organization of American Historians. He lives in Arlington, VA.
Loading...
or support indie stores by buying on