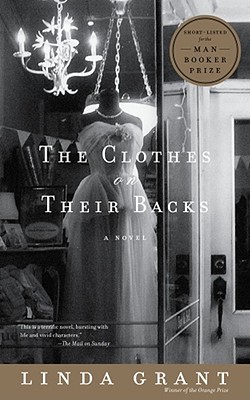 The Clothes On Their Backs (Hardcover)

Orange Prize winner and shortlisted for the Man Booker Prize 2008, Linda Grant has created an enchanting portrait of a woman who, having endured unbearable loss, finds solace in the family secrets her estranged uncle reveals. In vivid and supple prose, Grant subtly constructs a powerful story of family, love, and the hold the past has on the present.

Vivien Kovacs, a sensitive, bookish girl grows up sealed off from the world by her timid Hungarian refugee parents, who conceal the details of their history and shy away from any encounter with the outside world. She learns how to navigate British society from an eccentric cast of neighbors -- including a fading ballerina, a cartoonist, and a sad woman who wanders the city and teaches Vivien to be beautiful. She loses herself in books and reinvents herself according to her favorite characters, but it is through clothes that she ultimately defines herself.

Against her father's wishes, she forges a relationship with her uncle, a notorious criminal and slum landlord, who, in his old age, wants to share his life story. As he exposes the truth about her family's past Vivien learns how to be comfortable in her own skin and how to be alive in the world.

Grant is a spectacularly humanizing writer whose morally complex characters explore the line between selfishness and self-preservation.

Linda Grant is a novelist and journalist. She won the Orange Prize for Fiction in 2000 and the Lettre Ulysses Prize for the Art of Reportage in 2006. Her most recent novel, The Clothes on Their Backs, was shortlisted for the Man Booker Prize in 2008. She writes for The Guardian, The Telegraph, and Vogue.

Praise For The Clothes On Their Backs: A Novel…

"There is nothing lightweight about its themes and yet it is so artfully constructed that you barely feel you're reading it at all, so fluid and addictive is the plot." -- The Observer

"Gripping and written with keen understatement, it manages to be a domestic coming-of-age story even as it takes in the tumultuous sweep of the twentieth century." -- The Evening Standard

"Like money, clothes have real, symbolic and psychological value. Linda Grant understands these dimensions implicitly. Stitched beautifully into the fabric of her latest novel is an acute understanding of the role clothes play in reflecting identity and self-worth.... Grant's own particular beam reveals the way we acquire our sense of self from what gets reflected back to us, either in the mirror or in our relationships with others. She is at home writing about the thrilling ripple of a skirt as she is charting social tensions." -- The Sunday Telegraph

"We are what we wear because clothes reveal our personalities but, as Grant makes clear as she guides us through a dizzying ethical maze, they also conceal them....In this meticulously textured and complex novel, beneath Grant's surface dressing, what she is talking about is more than skin deep." -- The Sunday Times

"A beautifully detailed character study, a poignant family history, and a richly evocative portrait..." -- The Independent

"This vivid, enjoyable and consistently unexpected novel is like Anita Brookner with sex. Sándor's mix of the endearing and the repellent takes on a life beyond that of an absorbing and unexpectedly ambitious story." -- The Telegraph

"This is a terrific novel, bursting with life and vivid characters." -- The Mail on Sunday
or
Not Currently Available for Direct Purchase
Copyright © 2020 American Booksellers Association