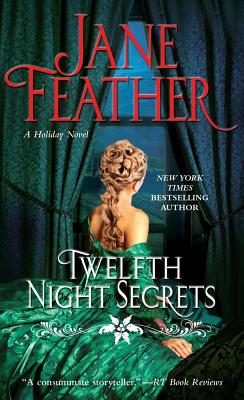 A touching and sexy Christmas-themed historical romance from New York Times bestselling author Jane Feather in which a young woman must carry out a spy mission against the man she loves in honor of her recently deceased brother.

While others dance and flirt, Lady Harriet Devere has a secret life, assisting her older brother Nick with his duties as a British spy. When Nick is killed, however, Harriet assumes that her work passing coded messages to the Ministry of War will cease. Instead, she is charged with a vitally important mission: spend Christmas determining if Julius Forsythe, Earl of Marbury, is a double agent for the French.

Harriet expects danger, just not to her heart. . . . As the hostess of a holiday house party, she is perfectly placed to closely observe her noble guest—his elegant clothes, his penetrating dark eyes, his virile athletic build. But when passion flames between them, Harriet realizes that only a holiday miracle will allow her to find true love—in the arms of this spy who has come for Christmas.

Jane Feather is the New York Times bestselling author of more than thirty sensual historical romances, including the Blackwater Bride series. She was born in Cairo, Egypt, and grew up in the south of England. She currently lives in Washington, DC, with her family. There are more than 10 million copies of her books in print.
Loading...
or
Not Currently Available for Direct Purchase