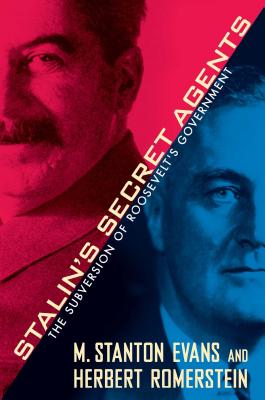 The Subversion of Roosevelt's Government

The first riveting examination of the shocking infiltration of the US government by Stalin’s Soviet intelligence networks during WWII.

Until now, many sinister events that transpired in the clash of the world's superpowers at the close of World War II and the ensuing Cold War era have been ignored, distorted, and kept hidden from the public. Through a careful survey of primary sources and disclosure of formerly secret records, Evans and Romerstein have written a riveting historical account that traces the vast deceptions that kept Stalin's henchmen on the federal payroll and sabotaged U.S. policy overseas. The facts presented here expose shocking cover-ups, from the top FDR aides who threatened internal security and free-world interests by exerting pro-Red influence on U.S.policy, to the grand juries that were rigged, to the countless officials of the Roosevelt and Truman administrations who turned a blind eye to the penetration problem. Stalin's Secret Agents convincingly indicts in historical retrospect the people responsible for these corruptions of justice.

M. Stanton Evans is the author of seven previous books, including Blacklisted by History and The Theme Is Freedom. Now a contributing editor at Human Events and a contributor at National Review, he was previously the editor of the Indianapolis News, a columnist for the Los Angeles Times syndicate, and a commentator for CBS and Voice of America. He lives near Washington, D.C.

Herbert Romerstein was head of the Office to Counter Soviet Disinformation at the U.S. Information Agency from 1983-1989. He had previously served on the staff of several congressional committees, including the House Intelligence Committee.
Loading...
or support indie stores by buying on