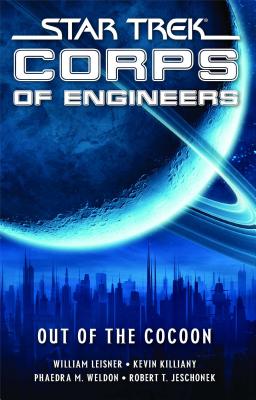 SCE: Out of the Cocoon

When something in the galaxy needs to be fixed, tweaked, investigated, or repaired, the Federation sends in the best: the Starfleet Corps of Engineers. Traveling throughout the quadrant on the Sabre-class U.S.S. da Vinci, Captain David Gold, former Starship Enterprise™ engineer Commander Sonya Gomez, and the crack S.C.E. team solve the problems of the galaxy, one disaster at a time.

Whether dealing with the legacy of Captain Jean-Luc Picard’s decision regarding the Mariposa colony, stopping an alien predator from destroying a pre-warp culture, fixing a planet-wide power outage, or repairing the damage done by the Dominion to a former ally, the Corps of Engineers is on the case!

But not all problems are technical: Dr. Elizabeth Lense deals with the consequences of her unexpected pregnancy, Security Chief Domenica Corsi encounters a Prime Directive crisis, Dr. Bart Faulwell faces a personal crossroads, and Chief Vance Hawkins must try to lay the ghosts of the Dominion War to rest.

William Leisner is the author of the acclaimed novels Star Trek: The Next Generation: Losing the Peace, and A Less Perfect Union (from the Myriad Universes collection Infinity's Prism).  He is a three-time winner of the late, lamented Star Trek: Strange New Worlds competition, as contributed tales to the official celebration of Star Trek's 40th anniversary in 2006, and TNG's 20th Anniversary in 2007.  A native of Rochester, New York, he currently lives in Minneapolis.

PHAEDRA M. WELDON has loved Star Trek since watching The Original Series reruns with her dad, and regrets he didn't live long enough to see the new Star Trek movie. The thrill of writing in the Star Trek Universe was a life long dream, realized when she met Dean Wesley Smith in 1997 and learned of the Star Trek Strange New Worlds Anthology. Since then, she has published two Starfleet Corps of Engineers ebooks, as well as book II, The Oppreessor's Wrong, in The Next Generation series, Sings and Arrows. She has had numerous short stories published with Daw Anthologies, and writes regularly for Catalyst Game Labs in their BattleTech and Shadowrun universes. Currently she is writing for Berkley in her Urban Fantasy original series, The Zoë Martinique Investigations. She was recently tapped to write a novel for the show Eureka! and is working on several other original projects. Presently she lives in Atlanta, Georgia, but will be moving to Maryland to be with her geneticist husband and precocious daughter. She can be found online most mornings at 7 a.m., writing her daily pages in original work, and at night pounding the keyboards for original universes. If there is one thing she's learned , it's that there are three constants in the universe: Death, Taxes, and Star Trek.

Robert Jeschonek is an award-winning writer and author of fiction, comics, essays, articles, and podcasts. His young adult fantasy novel My Favorite Band Does Not Exist won the Forward National Literature Award and was named one of Booklist’s Top Ten First Novels for Youth. His cross-genre science fiction thriller Day 9 is an International Book Award winner. Jeschonek is based in Johnstown, Pennsylvania. You can visit his website at RobertJeschonek.com.
or
Not Currently Available for Direct Purchase
Copyright © 2020 American Booksellers Association