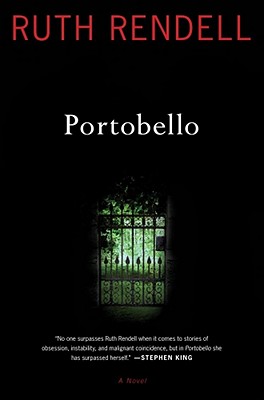 Ruth Rendell is widely considered to be crime fiction’s reigning queen, with a remarkable career spanning more than forty years. Now, in Portobello, she delivers a captivating and intricate tale that weaves together the troubled lives of several people in the gentrified neighborhood of London’s Notting Hill.

Walking to the shops one day, fifty-year-old Eugene Wren discovers an envelope on the street bulging with cash. A man plagued by a shameful addiction—and his own good intentions—Wren hatches a plan to find the money’s rightful owner. Instead of going to the police, or taking the cash for himself, he prints a notice and posts it around Portobello Road. This ill-conceived act creates a chain of events that links Wren to other Londoners—people afflicted with their own obsessions and despairs. As these volatile characters come into Wren’s life—and the life of his trusting fiancée—the consequences will change them all.

Portobello is a wonderfully complex tour de force featuring a dazzling depiction of one of London’s most intriguing neighborhoods—and the dangers beneath its newly posh veneer.

Praise For Portobello: A Novel…

“In her trademark matter-of-fact prose, this clear-eyed, quietly brilliant writer examines the ties that ensnare her small cast of characters — people linked in ways that are sometimes random, sometimes not.”—Adam Woog, Seattle Times

“No one surpasses Ruth Rendell when it comes to stories of obsession, instability, and malignant coincidence, but in Portobello she has surpassed herself. Invisible wires draw seemingly disparate characters closer and closer until this reader actually felt them under his skin. The clarity and reason of her prose stand in perfect contrast to the escalating madness in the tale. Portobello is a brilliant novel.”—Stephen King

"A thriller steeped in psychological intrigue . . . Rendell's prose style is as succinct and accessible as ever."--Daily Mirror (UK)

"Impossible to put down. . . . Portobello is as brilliant as anything she has ever written."--The Evening Standard (UK)

Ruth Rendell (1930–2015) won three Edgar Awards, the highest accolade from Mystery Writers of America, as well as four Gold Daggers and a Diamond Dagger for outstanding contribution to the genre from England’s prestigious Crime Writ­ers’ Association. Her remarkable career spanned a half century, with more than sixty books published. A member of the House of Lords, she was one of the great literary figures of our time.
Loading...
or
Not Currently Available for Direct Purchase