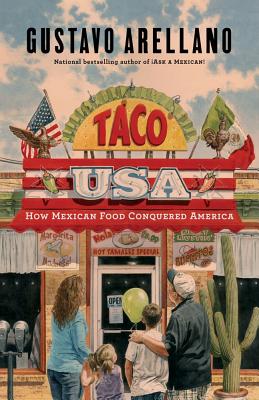 The nationally syndicated columnist and bestselling author of ¡Ask a Mexican! presents an entertaining, tasty trip through the history and culture of Mexican food, uncovering great stories and charting the cuisine’s tremendous popularity in America.

Nationally syndicated columnist and bestselling author of ¡Ask a Mexican! Gustavo Arellano presents an entertaining, tasty trip through the history and culture of Mexican food in this country, uncovering great stories and charting the cuisine’s tremendous popularity in el Norte. In the tradition of Bill Buford’s Heat and Calvin Trillin’s The Tummy Trilogy, Arellano’s fascinating narrative combines history, cultural criticism, personal anecdotes, and Jesus on a tortilla.

When salsa overtook ketchup as this country’s favorite condiment in the 1990s, America’s century-long love affair with Mexican food reached yet another milestone. In seemingly every decade since the 1880s, America has tried new food trends from south of the border—chili, tamales, tacos, enchiladas, tequila, bacon-wrapped hot dogs, and so many more—loved them, and demanded the next great thing. As a result, Mexican food dominates American palates to the tune of billions of dollars in sales per year, from canned refried beans to frozen margaritas and ballpark nachos. It’s a little-known history, one that’s crept up on this country like your Mexican neighbors—and left us better for it.

Now, Taco USA addresses the all-important questions: What exactly constitutes “Mexican” food in the United States? How did it get here? What’s “authentic” and what’s “Taco Bell,” and does it matter? What’s so cosmic about a burrito? And why do Americans love Mexican food so darn much?

“In this entertaining nod to culinary and cultural histories, journalist Arellano traces the roots of Mexican food in the U.S. and explores the cuisine’s many offshoots, underscoring why salsa is now our #1 condiment… Arellano makes the point, one that’s particularly relevant in today’s heated immigration debate, that as much as some Americans may protest Mexican immigrants, they’re in love with Mexican food.” —Publishers Weekly

“An appealing cultural exploration of Mexican food in the United States…. Readers will come away not only hungry, but with a deeper understanding of the Mexican people and their cuisine.”—Kirkus

“In a chatty, lighthearted style and with mordant wit, Arellano traces the steady northward creep of Mexican cooking from Texas and the Southwest into the heart of Yankee territory­.”—Booklist

“[Arellano] manages to squeeze in mentions of just about every Mexican restaurant (including, believe it or not, both Taco Cabana and the dining room of the Austin Hyatt), product line, and preparation in the country. If you’ve ever wondered about the roots of Taco Bell or why fajitas are called that or who invented the frozen-margarita machine, you’ll find answers here.”—Slate Magazine

“Gustavo Arellano…is perhaps the greatest (and only) living scholar of Mexican-American fast food.”

“An informative,entertaining glimpse into the story of how Mexican food entered Americanpopular culture.”

Gustavo Arellano’s ¡Ask a Mexican! column has a circulation of more than two million in thirty-eight markets (and counting). He has received the President’s Award from the Los Angeles Press Club, an Impact Award from the National Hispanic Media Coalition, and a 2008 Latino Spirit Award from the California State legislature. Arellano has appeared on the Today show, Nightline, NPR’s Talk of the Nation, and The Colbert Report. For more information, visit AskAMexican.net.
Loading...
or
Not Currently Available for Direct Purchase