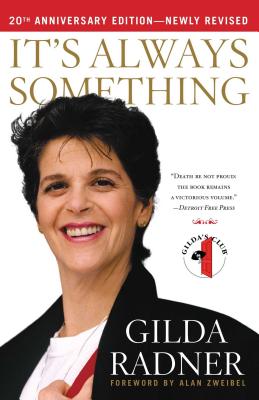 To honor the twentieth anniversary of beloved comedienne Gilda Radner’s death from ovarian cancer comes a commemo- rative edition of her memoir, It’s Always Something—featuring a newly updated resource guide for people living with cancer and a tribute by Radner’s former colleagues at Saturday Night Live.

As a cast member on the original Saturday Night Live, Gilda Radner created a compelling character named “Roseann Rosannadanna” who habitually ended her routine with the line, “It’s always something,” which was her father’s favorite expression about life. Radner chose the catch- phrase she made famous as the title to her brave, funny, and painfully honest memoir: the story of her struggle against cancer and her determination to continue laughing.

Gilda’s Club, a network of affiliate clubhouses that seeks to provide a social and emotional support community to people living with cancer, was founded in Radner’s memory in 1991. The name of the organization comes from a remark Gilda once made, that cancer gave her “membership to an elite club I’d rather not belong to.” In partnership with Gilda’s Club, It’s Always Something includes valuable information for all whose lives have been touched by cancer and reminds us of the important place laughter has in healing.

Told as only Gilda Radner could tell it, It’s Always Something is the inspiring story of a courageous, funny woman fighting to enjoy life no matter what the circumstances. She died in 1989. Gilda’s Club is distinguished by its unique philosophy and pro- gram, “cancer support for the whole family, the whole time.” Learn more about Gilda’s Club at GildasClub.org.

Praise For It's Always Something: Twentieth Anniversary Edition…

"Death be not proud: the book remains a victorious volume." -- Detroit Free Press

"Gilda mined her humor from everyday life, and what resulted really was something." -- The San Diego Union-Tribune

Gilda Radner was born and raised in Detroit, began her acting career with Chicago’s Second City comedy improvisational group. Coming to New York during the early 1970s, she worked in several National Lampoon productions with John Belushi. In 1975, Ms. Radner was chosen as one of the original Not Ready for Primetime Players on television’s Saturday Night Live, where she was featured from 1975–1980. Subsequently, she appeared in the Broadway production of Gilda Live! and several comedy films including Hanky Panky, where she met her husband, Gene Wilder.
Loading...
or support indie stores by buying on