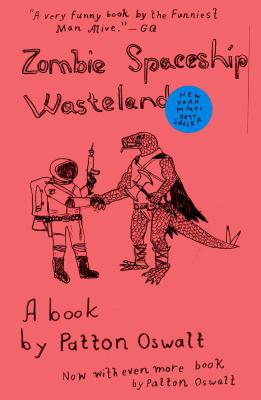 A Book by Patton Oswalt

Now in paperback, from a “multi-faceted, medium-hopping, culture skewering performer” (SPIN), this is a journey through the world of Patton Oswalt, best known for his roles in film (Big Fan and Ratatouille) and television (The King of Queens and The United States of Tara), but also beloved for his ascerbic, highly eloquent, and wildly funny standup comedy.

Prepare yourself for a journey through the world of Patton Oswalt, one of the most creative, insightful, and hysterical voices on the entertain­ment scene today. Widely known for his roles in the films Big Fan and Ratatouille, as well as the television hit The King of Queens, Patton Oswalt—a staple of Comedy Central—has been amusing audiences for decades. Now, with Zombie Spaceship Wasteland, he offers a fascinating look into his most unusual, and lovable, mindscape.

Oswalt combines memoir with uproarious humor, from snow forts to Dungeons & Dragons to gifts from Grandma that had to be explained. He remem­bers his teen summers spent working in a movie Cineplex and his early years doing stand-up. Readers are also treated to several graphic elements, includ­ing a vampire tale for the rest of us and some greeting cards with a special touch. Then there’s the book’s centerpiece, which posits that before all young creative minds have anything to write about, they will home in on one of three story lines: zom­bies, spaceships, or wastelands.

Oswalt chose wastelands, and ever since he has been mining our society’s wasteland for perversion and excess, pop culture and fatty foods, indie rock and single-malt scotch. Zombie Spaceship Wasteland is an inventive account of the evolution of Patton Oswalt’s wildly insightful worldview, sure to indulge his legion of fans and lure many new admirers to his very entertaining “wasteland.”

Praise For Zombie Spaceship Wasteland: A Book by Patton Oswalt…

"Patton Oswalt...is one of those rare performers whose material translates into any medium without losing its sharpness--including, for the first time, print. . . . It is well worth it to join him on his odyssey."--Washington Post

“Sharp storytelling and sardonic wit.... Oswalt populates these stories with expertly drawn characters, and infuses them with a limitless supply of cultural references and deft turns of phrase.” —Boston Globe

“A thoughtful, hilarious, quasi-memoir that puts the standard-issue comedy-routine-in-book-form to shame.” —SPIN

“A thoughtful, hilarious, quasi-memoir that puts the standard-issue comedy-routine-in-book-form to shame.” —SPIN

“Patton Oswalt is one of those rare performers whose material translates into any medium without losing its sharpness—including, for the first time, print.... It is well worth it to join him on his odyssey.” —Washington Post

"A very funny book by the Funniest Man Alive." --GQ

Patton Oswalt is the author of the New York Times bestseller Zombie Spaceship Wasteland. He has released four TV specials and four critically acclaimed comedy albums, including the Grammy-nominated My Weakness Is Strong. He put together the Comedians of Comedy tour and television series. Oswalt has also appeared on many television shows and in more than twenty films, including Young Adult, Big Fan, and Ratatouille. He lives in Los Angeles, California.
Loading...
or support indie stores by buying on