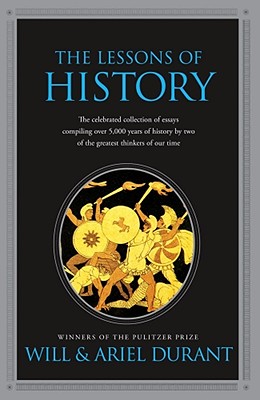 The Lessons of History

A concise survey of the culture and civilization of mankind, The Lessons of History is the result of a lifetime of research from Pulitzer Prize–winning historians Will and Ariel Durant.

With their accessible compendium of philosophy and social progress, the Durants take us on a journey through history, exploring the possibilities and limitations of humanity over time. Juxtaposing the great lives, ideas, and accomplishments with cycles of war and conquest, the Durants reveal the towering themes of history and give meaning to our own.

Praise For The Lessons of History…

"The Durants' masterpiece belongs in any home library and occupies a shelf in many."
--Dana D. Kelley, Arkansas Democrat-Gazette

Will Durant (1885–1981) was awarded the Pulitzer Prize (1968) and the Presidential Medal of Freedom (1977). He spent more than fifty years writing his critically acclaimed eleven-volume series, The Story of Civilization (the later volumes written in conjunction with his wife, Ariel). A champion of human rights issues, such as the brotherhood of man and social reform, long before such issues were popular, Durant’s writing still educates and entertains readers around the world.

Will and Ariel Durant, after spending over fifty years completing the critically acclaimed series The Story of Civilization, were awarded the Pulitzer Prize for General Nonfiction in 1968. In 1977, the Durants were presented with the Presidential Medal of Freedom.  Champions of human rights and social reform, the Durants continue to educate and entertain readers the world over. For more information on their work, visit www.willdurant.com.
Loading...
or support indie stores by buying on