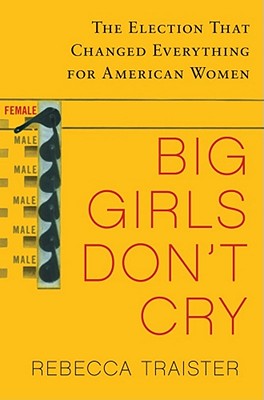 REBECCA TRAISTER, whose coverage of the 2008 presidential election for Salon confirmed her to be a gifted cultural observer, offers a startling appraisal of what the campaign meant for all of us. Though the election didn’t give us our first woman president or vice president, the exhilarating campaign was nonetheless transformative for American women and for the nation. In Big Girls Don’t Cry, her electrifying, incisive and highly entertaining first book, Traister tells a terrific story and makes sense of a moment in American history that changed the country’s narrative in ways that no one anticipated.
It was all as unpredictable as it was riveting: Hillary Clinton’s improbable rise, her fall and her insistence (to the consternation of her party and the media) on pushing forward straight through to her remarkable phoenix flight from the race; Sarah Palin’s attempt not only to fill the void left by Clinton, but to alter the very definition of feminism and claim some version of it for conservatives; liberal rapture over Barack Obama and the historic election of our first African-American president; the media microscope trained on Michelle Obama, harsher even than the one Hillary had endured fifteen years earlier. Meanwhile, media women like Katie Couric and Rachel Maddow altered the course of the election, and comedians like Tina Fey and Amy Poehler helped make feminism funny.
What did all this mean to the millions of people who were glued to their TV sets, and for the country, its history and its future?
As Traister sees it, the 2008 election was good for women. The campaign for the presidency reopened some of the most fraught American conversations—about gender, race and generational difference, about sexism on the left and feminism on the right—difficult discussions that had been left unfinished but that are crucial to further perfecting our union.
The election was also catalytic, shaping the perspectives of American women and men from different generations and backgrounds, altering the way that all of us will approach questions of women and power far into the future. When Clinton cried, when Palin reached for her newborn at the end of a vice presidential debate, when Couric asked a series of campaign-ending questions, the whole country was watching women’s history—American history—being made.
Throughout, Traister weaves in her own experience as a thirtysomething feminist sorting through all the events and media coverage—vacillating between Clinton and Obama and forced to face tough questions about her own feminism, the women’s movement, race and the different generational perspectives of women working toward political parity some ninety years after their sex was first enfranchised.
It was a time of enormous change, and there is no better guide through that explosive, infuriating, heartbreaking and sometimes hilarious year than Rebecca Traister. Big Girls Don’t Cry offers an enduring portrait of dramatic cultural and political shifts brought about by this most historic of American contests.

“Superb.... Big Girls Don’t Cry is much more than an assemblage of these type of ‘boys on the bus’ campaign anecdotes. As anyone who’s followed Traister’s sharp and lively essays in Salon knows, her particular ‘beat’ is gender. What she does here is tease out the cultural narratives that came to wield so much power during the [2008 presidential] campaign and, finally, in the voting booth.... There’s so much…to be learned and argued over in Big Girls Don’t Cry…. Girls, these days, can not only run for president; they can also brilliantly analyze presidential campaigns, too.”
— Maureen Corrigan

“I ended up admiring Traister and loving her book. In its best parts, it is a raw and brave memoir of a journalist who discovered that all is not well for women in America, and a description of how she and other young women are laying claim to their rightful place in the fight. . . . Such a youthful embrace of the women’s work yet to be done is exhilarating—for her generation and for mine.”
— Connie Schultz

“Traister's book masterfully reminds us that we have just lived through a historic moment when a woman, no matter how flawed she was, ‘came within spitting distance,’ of a nomination for president.”

“Rebecca Traister is the most brilliant voice on feminism in this country. I was totally caught up in Big Girls Don’t Cry from the first page, and couldn't believe how much Ms. Traister captured and illuminated a story with which I had thought I was so well versed: the 2008 election. She told it as if for the first time.”
— Anne Lamott, author of Bird by Bird

“Traister is a clear-eyed, whip-smart observer of the political scene, alert to the resurgence of identity politics as well as the recrudescence of feminism that marked the most recent presidential campaign. She has fashioned a remarkably engrossing page-turner of a cultural narrative, one which features outsize characters and unpredictable plot twists. Big Girls Don't Cry is a report on the 2008 election but more importantly it is a report on the way we think now. If you want to understand where we are going as an electoral entity—why Sarah Palin is the folk heroine du jour and why Michelle Obama has domesticated her free-thinking persona—read this book.”
— Daphne Merkin, novelist and critic

“The startling intelligence and graceful prose of Rebecca Traister’s coverage of American cultural politics has been one of journalism’s best kept secrets during the past decade. With Big Girls Don’t Cry, she claims her place as heir to the tradition of Mary McCarthy and Joan Didion as she excavates the tectonic changes that lurked below the surface of most election reporting and illuminates events in a manner that will surprise political junkies and casual observers alike.”
— Eric Alterman, author of Why We’re Liberals

“In this riveting account of the 2008 election, Rebecca Traister negotiates the shoals of race and gender with exceptional grace and skill and establishes herself as one of the major younger journalists working today.”
— Katha Pollitt, poet, essayist, and columnist for The Nation

“Rebecca Traister’s lively, insightful narrative discloses an under-reported layer of the 2008 presidential campaign—and in so doing makes the subject fresh and vital again. An important and disquieting book, but also a pleasure to read.”
— Robert Draper, author of Dead Certain

“I didn't know what I didn't know about the 2008 election until reading Rebecca Traister’s smart, entertaining take on it. Well-researched, well-written, provocative, and insightful, BGDC is a high-spirited salute to feminism in its many forms.”
— Curtis Sittenfeld, author of American Wife

“Traister brings her elegant prose and unique perspective—thoroughly feminist but never doctrinaire—to this absorbing personal exploration of the meaning of gender in the last election.”
— Ariel Levy, author of Female Chauvinist Pigs

“[Traister] bludgeons conventional political wisdom by trenchantly exposing Palin's strange triangulation of mainstream feminism, Clinton's need to appear vulnerable in order to appeal to women, and the precarious position of black women--some of whom were conflicted between supporting candidates who mirrored their gender or their race. . . . Traister does a fine job in showing that progress does not proceed in straight lines, and, sometimes, it's the unlikeliest of individuals who initiate real change.”

“Traister makes the compelling argument that the 2008 election campaign changed the role of women in national politics. . . . A nuanced look at how the recent election shaped—and was shaped by—gender.”

"Traister presents an excellent synthesis of a time ‘in which what was once called the women’s liberation movement found a thrilling new life.’”

Rebecca Traister is writer at large for New York magazine and a contributing editor at Elle. A National Magazine Award finalist, she has written about women in politics, media, and entertainment from a feminist perspective for The New Republic and Salon and has also contributed to The Nation, The New York Observer, The New York Times, The Washington Post, Vogue, Glamour and Marie Claire. She is the author of All the Single Ladies and the award-winning Big Girls Don’t Cry. She lives in New York with her family.
Loading...
or
Not Currently Available for Direct Purchase