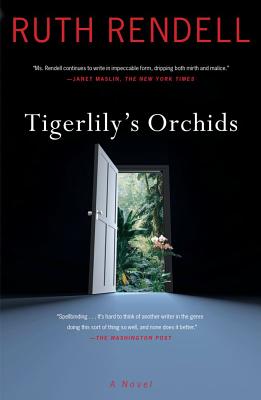 Is it dangerous to know too much about your neighbors?

When Stuart Font throws a housewarming party, he invites all the residents of his new building—among them, three flippant young girls, a lonely spinster, a man with a passion for classical history, and a woman determined to drink herself to death. He definitely does not want his girlfriend, Claudia, in attendance, as he would also have to invite her lawyer husband. But careful planning can only get a person so far. As it turns out, this party will be one everyone remembers.

Meanwhile, living in a town house opposite Stuart’s building, in reclusive isolation, is a young, beautiful Asian woman known as Tigerlily. As though from some strange urban fairy tale, she emerges infrequently to exert a terrible spell.

In Tigerlily’s Orchids, Ruth Rendell has written a darkly humorous and psychologically thrilling novel about the eccentric inhabitants of a London terrace—about the secrets they keep, and what they will do to hide them.

Praise For Tigerlily's Orchids: A Novel…

"Disgraceful behavior has rarely been written about so gracefully.”—Boston Globe

“There is widespread agreement among both readers and reviewers that Ruth Rendell is the best crime fiction writer of our time.”—San Diego Union Tribune

“Exquisitely paced drama… Rendell once again creates an addictive read in which the characters are drawn and defined by the author's wry observations.”—Richmond Times-Dispatch
or
Not Currently Available for Direct Purchase
Copyright © 2020 American Booksellers Association