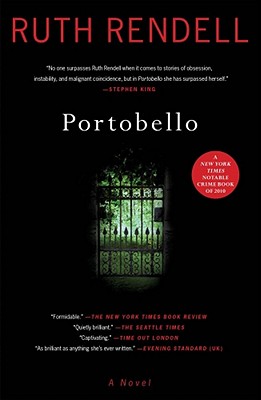 Ruth Rendell is widely considered to be crime fiction’s reigning queen, with a remarkable career spanning more than forty years. Now, in Portobello, she delivers a captivating and intricate tale that weaves together the troubled lives of several people in the gentrified neighborhood of London’s Notting Hill.

Walking to the shops one day, fifty-year-old Eugene Wren discovers an envelope on the street bulging with cash. A man plagued by a shameful addiction—and his own good intentions—Wren hatches a plan to find the money’s rightful owner. Instead of going to the police, or taking the cash for himself, he prints a notice and posts it around Portobello Road. This ill-conceived act creates a chain of events that links Wren to other Londoners—people afflicted with their own obsessions and despairs. As these volatile characters come into Wren’s life—and the life of his trusting fiancée—the consequences will change them all.

Portobello is a wonderfully complex tour de force featuring a dazzling depiction of one of London’s most intriguing neighborhoods—and the dangers beneath its newly posh veneer.

Praise For Portobello: A Novel…

“The characters jump off the page. The page-to-page surprises are so clever that the reader is left agape at each twist and turn. The pieces fit together brilliantly.”—Pittsburgh Post-Gazette

“An expert dissection of the hazards of human connections and the search for happiness.”—USA Today

“A novel that glides along Portobello Road like the lime in a gin and tonic. It's intoxicating.”—Newsday
or
Not Currently Available for Direct Purchase
Copyright © 2020 American Booksellers Association