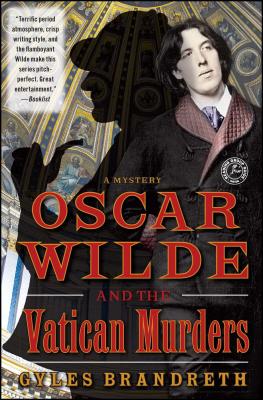 Oscar Wilde and the Vatican Murders

Oscar Wilde makes a triumphant return to sleuthing in the fifth novel in the critically acclaimed historical murder mystery series based on real events, featuring Wilde as the detective aided by his friend Arthur Conan Doyle, and written by a premier British biographer.

Oscar Wilde and the Vatican Murders opens in 1892, as an exhausted Arthur Conan Doyle retires to a spa in Germany with a suitcase full of fan mail. But his rest cure does not go as planned. The first person he encounters is Oscar Wilde, and the two friends make a series of macabre discoveries among the letters—a finger; a lock of hair; and, finally, an entire severed hand.

The trail leads the intrepid duo to Rome, and to a case that involves miracles as well as murder. Pope Pius IX has just died—these are uncertain times in the Eternal City. To uncover the mystery and discover why the creator of Sherlock Holmes has been summoned in this way, Wilde and Conan Doyle must penetrate the innermost circle of the Catholic Church and expose the deadly secrets of the six men closest to the pope.

In Gyles Brandreth’s captivating and richly atmospheric novel, Wilde’s skills as a detective are put to the test in his most compelling case yet.

Gyles Brandreth is a prominent BBC broadcaster, novelist, biographer, and a former Member of Parliament. He is also the author of the Oscar Wilde Mystery series. Find out more at GylesBrandreth.net.
Loading...
or support indie stores by buying on