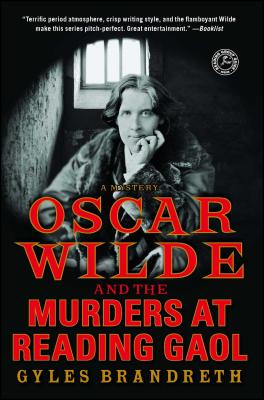 Oscar Wilde and the Murders at Reading Gaol (Paperback)

In this new installment in the engaging mystery series Booklist called “pitch-perfect” and “enthralling”—currently in development as a BBC television series—the incomparable playwright, novelist, raconteur, and now ex-convict Oscar Wilde faces his most fiendishly puzzling case yet.

Oscar Wilde has fled to France after his release from Reading Gaol. Tonight he is sharing a drink and the story of his cruel imprisonment with a mysterious stranger. Oscar has endured the treadmill, solitary confinement, censored letters, no writing materials. Yet even in the midst of such deprivation, his astonishing detective powers remain undiminished—and when first a brutal warder and then the prison chaplain are found murdered, who else should the governor turn to for help other than Reading Gaol’s most celebrated inmate?

Gyles Brandreth is a prominent BBC broadcaster, novelist, biographer, and a former Member of Parliament. He is also the author of the Oscar Wilde Mystery series. Find out more at GylesBrandreth.net.
or
Not Currently Available for Direct Purchase
Copyright © 2020 American Booksellers Association