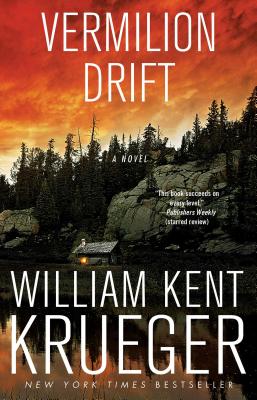 “William Kent Krueger's mystery series featuring Cork O'Connor just keeps getting better with each installment. The latest Cork is asked to investigate a disappearance and what he uncovers leads to cold cases on the Ojibwe reservation as well as forgotten things from Cork's own past. Wonderful characters, twists and turns, and enough action to keep you going.”
— Sue Richardson, Maine Coast Book Shop, Inc., Damariscotta, ME
View the List

William Kent Krueger’s gripping tale of suspense begins with a recurring nightmare, a gun, and a wound in the earth so deep and horrific that it has a name: Vermilion Drift.

When the Department of Energy puts an underground iron mine on its short list of potential sites for storage of nuclear waste, a barrage of protest erupts in Tamarack County, Minnesota, and Cork is hired as a security consultant.

Deep in the mine during his first day on the job, Cork stumbles across a secret room that contains the remains of six murder victims. Five appear to be nearly half a century old—connected to what the media once dubbed "The Vanishings," a series of unsolved disappearances in the summer of 1964, when Cork’s father was sheriff in Tamarack County. But the sixth has been dead less than a week. What’s worse, two of the bodies—including the most recent victim—were killed using Cork’s own gun, one handed down to him from his father.

As Cork searches for answers, he must dig into his own past and that of his father, a well-respected man who harbored a ghastly truth. Time is running out, however. New threats surface, and unless Cork can unravel the tangled thread of clues quickly, more death is sure to come.

Vermilion Drift is a powerful novel, filled with all the mystery and suspense for which Krueger has won so many awards. A poignant portrayal of the complexities of family life, it’s also a sobering reminder that even those closest to our hearts can house the darkest—and deadliest—of secrets.

"As always, Krueger’s writing couples the best of literary and commercial fiction, with intelligent, well-defined characters populating the story. Although the book contains violence, the author never makes it extraneous or graphic. He is one of those rare writers who manage to keep the suspense alive until the final page. Krueger fans will find a feast in between these covers, and for those who have yet to sample his fine and evocative writing, the book offers a complex yet completely believable plot, all tied up in words sharpened by one of the modern masters of the craft." --Kirkus Reviews (starred)

“Rock-solid prose combines with effective characterizations and a logical if complex plot for a thrilling read. This book succeeds on every level and ought to attract the author a deservingly wide readership.” —Publishers Weekly (starred)

“Cork O’Connor…is one of those hometown heroes you rarely see…someone so decent and true, he might restore his town’s battered faith in the old values.” —The New York Times Book Review

“There’s a reason why William Kent Krueger is known as a writer’s writer. His stories are works of art, literary wonders that beautifully capture a sense of place while they deliver a powerful emotional punch.” —Tess Gerritsen