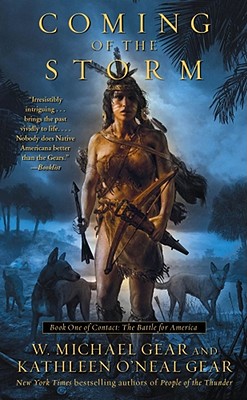 Coming of the Storm (Mass Market)

The pale, bearded newcomers who call themselves “Kristianos” fascinate Black Shell, an exiled Chickasaw trader, and not even the counsel of Pearl Hand, the beautiful, extraordinary woman who has consented to be his mate, can dissuade him from interacting with them. Only after a firsthand lesson in Kristiano brutality does Black Shell fully comprehend the dangers these invaders pose to his people’s way of life.

While his first instinct is to run far from the then, Black Shell has been called to a greater destiny by the Spirit Being known as Horned Serpent. With Pearl Hand by his side, Black Shell must find a way to unite the disparate tribes and settlements of his native land and overcome the merciless armies of the man called Hernando de Soto.

W. Michael Gear and Kathleen O’Neal Gear are the New York Times bestselling authors of Coming of the Storm, Fire the Sky, and A Searing Wind in the Contact: Battle for America series, as well as more than fifty international bestsellers. In addition to writing both fiction and nonfiction together and separately, the Gears operate an anthropological research company, Wind River Archaeological Consultants, and raise buffalo on their ranch in northern Wyoming. Visit their informative website and read their blog at Gear-Gear.com.

Praise For Coming of the Storm: Book One of Contact: The Battle for America…

"An irresistibly intriguing story line that brings the past vividly to life.... Nobody does Native Americana better than the Gears." -- Booklist