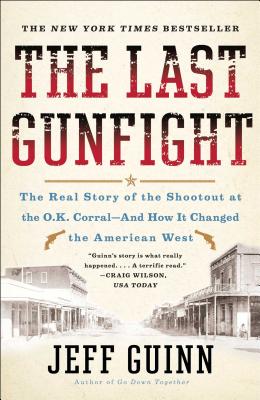 The Real Story of the Shootout at the O.K. Corral-And How It Changed the American West

A New York Times bestseller, Jeff Guinn’s definitive, myth-busting account of the most famous gunfight in American history reveals who Wyatt Earp, Doc Holliday, and the Clantons and McLaurys really were and what the shootout was all about—“the most thorough account of the gunfight and its circumstances ever published” (The Wall Street Journal)

On the afternoon of October 26, 1881, in a vacant lot in Tombstone, Arizona, a confrontation between eight armed men erupted in a deadly shootout. The Gunfight at the O.K. Corral would shape how future generations came to view the Old West. Wyatt Earp, Doc Holliday, and the Clantons became the stuff of legends, symbolic of a frontier populated by good guys in white hats and villains in black ones. It’s a colorful story—but the truth is even better.

Drawing on new material from private collections—including diaries, letters, and Wyatt Earp’s own hand-drawn sketch of the shootout’s conclusion—as well as archival research, Jeff Guinn gives us a startlingly different and far more fascinating picture of what actually happened that day in Tombstone and why.

Jeff Guinn is the bestselling author of numerous books, including Go Down Together, The Last Gunfight, Manson, and The Road to Jonestown. He lives in Fort Worth, Texas, and is a member of the Texas Literary Hall of Fame.
Loading...
or support indie stores by buying on