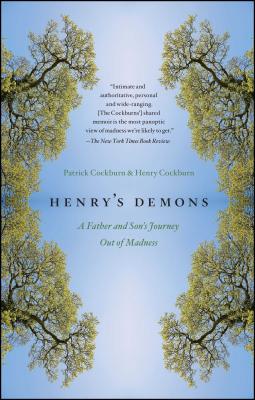 A Father and Son's Journey Out of Madness

Now in paperback, the exceptionally well-reviewed, “intimate and authoritative…outstanding double memoir” (The New York Times Book Review) about schizophrenia written by an eminent journalist and his son.

On a cold February day two months after his twentieth birthday, Henry Cockburn waded into an estuary outside Brighton, England and nearly drowned. Voices, he said, had urged him to do it. Nearly halfway around the world in Afghanistan, journalist Patrick Cockburn learned his son had been admitted to a hospital. Ten days later, Henry was diagnosed with schizophrenia. Narrated by Patrick and Henry, this is the haunting, extraordinary story of the eight years he spent almost entirely in hospitals—and his family’s steadfast response to a bewildering condition.

Combining Patrick’s frank reporting of his son’s transformation from art student to mental patient with Henry's raw, eerily beautiful description of hearing trees and bushes speaking to him, voices compelling him to wander the countryside, the loneliness of life within hospital walls, and finally, his steps towards recovery, Henry's Demons is one of the most profoundly moving and revealing accounts of mental illness ever written.

Praise For Henry's Demons: A Father and Son's Journey Out of Madness…

“You close Henry’s Demons with a profound sense of ­gratitude for this family’s courage in sharing what they have endured and crafting it into something of use -- and of beauty.” --Daily Mail

Patrick Cockburn is Iraq correspondent for the Independent in London. He has received the Martha Gellhorn prize for war reporting, the James Cameron Award, and the Orwell Prize for Journalism. He is the author of Muqtada, about war and rebellion in Iraq; The Occupation (shortlisted for a National Book Critics Circle Award in 2007); The Broken Boy, a memoir; and with Andrew Cockburn, Out of the Ashes: The Resurrection of Saddam Hussein.

Henry Cockburn was born in London and raised in Canterbury, where he attended King's School and received several awards for his artwork.  In 2002, during his first year studying art at Brighton University, he was diagnosed with schizophrenia.  He recently moved out of a rehabilitation center to begin living independently.
Loading...
or support indie stores by buying on