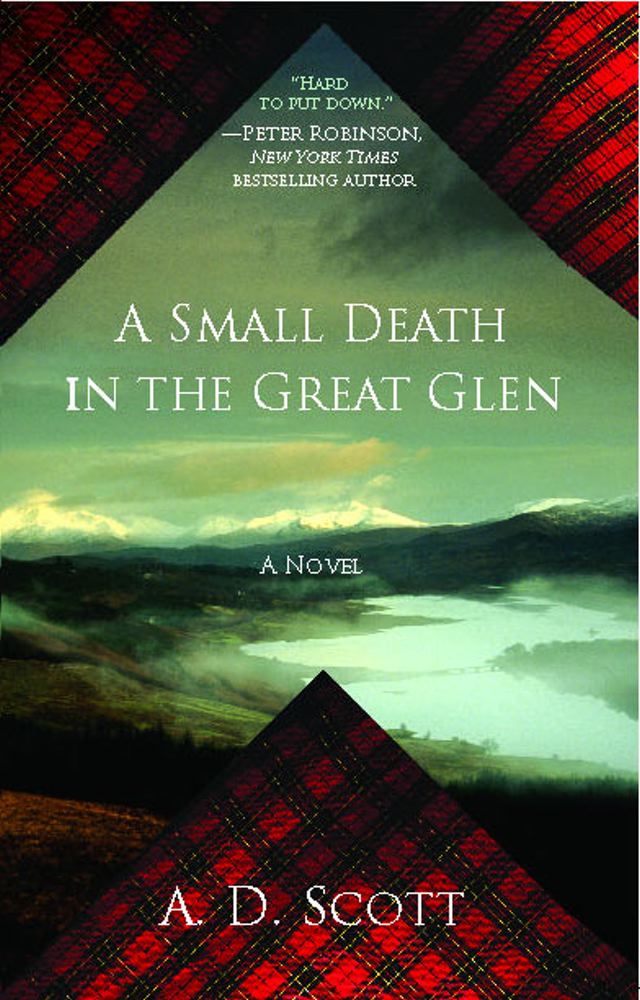 A Small Death in the Great Glen

“Life in a Scottish village circa 1950 seems bucolic on the surface. But scratch a little beneath and the scene is not so pretty. McAllister has left the big city to be editor in chief of a small rag, trying to change it into a paper that delivers relevant, hard hitting news. The death of a small child shocks the townsfolk. Conveniently enough a Polish sailor has jumped ship in the harbor, he must have done the dirty deed. It couldn't be one of the locals. Or could it? This is a great new series! The characters are engrossing and likeable. I hope A. D. Scott keeps writing, I would enjoy visiting them again.”
— Deon Stonehouse, Sunriver Books, Sunriver, OR
View the List

A gripping and atmospheric novel of suspense, set in the Scottish Highlands in the 1950s, featuring a small-town newspaper staff.

In the Highlands of 1950s Scotland, a boy is found dead in a canal lock. Two young girls tell such a fanciful story of his disappearance that no one believes them. The local newspaper staff—including Joanne Ross, the part-time typist embroiled in an abusive marriage, and her boss, a seasoned journalist determined to revamp the paper—set out to uncover and investigate the crime. Suspicion falls on several townspeople, all of whom profess their innocence. Alongside these characters are the people of the town and neighboring glens; a refugee Polish sailor; an Italian family whose café boasts the first known cappuccino machine in the north of Scotland; and a corrupt town clerk subverting the planning laws to line his own pocket.

Together, these very different Scots harbor deep and troubling secrets underneath their polished and respectable veneers—revelations that may prevent the crime from being solved and may keep the town firmly in the clutches of its shadowy past.

Praise For A Small Death in the Great Glen: A Novel (The Highland Gazette Mystery Series #1)…

"A.D. Scott’s beautifully written debut novel brims with intimate knowledge of the Scottish Highlands and of the dark secrets that lie behind the walls of a quaint rural village. Vividly realized with memorable characters and a stunning setting, A Small Death in the Great Glen is a novel to savor." — Malla Nunn, author of A Beautiful Place to Die

"An impressive first novel. I'd have imagined 1950s Inverness as gray and humorless, but Scott uses the background of religious intolerance, prejudice and petty jealousies, to bring together an engaging cast of warm and colorful characters. The central protagonists, all of whom work for a local newspaper, are interesting, well-rounded and sympathetic. I hope to meet them again." — Ann Cleeves, author of Red Bones

"This atmospheric novel sets you firmly in small town Scotland of the 1950s. The characters are engaging and the suspense mounts along with a growing sense of dread as events surrounding the death of a young boy unfold. Once you start reading, you'll find it hard to put down." — Peter Robinson, New York Times bestselling author of The Price of Love

"This splendid debut mystery has everything going for it…Scott’s writing is engaging, and her plotting Macbethian…The characters of the crusading small-town newspaper are skillfully drawn and will have readers rooting for them unequivocally…captivating on every level" —Booklist, starred review

"This mystery is a delight to unravel, with its lively dialect-spouting players, inhabiting a lavishly described, forbidding but beautiful landscape. A rollickying, cozy escapade" —Kirkus

"Written with humor, compassion and a fine sense of tragedy, A Small Death in the Great Glen is the first in a series by this promising new author" —Bookpage

"Scott brilliantly evokes the life of a small Scottish town and touches on issues that continue to perplex and horrify us. Score a big victory for "A Small Death." —The Richmond Times-Dispatch

A.D. Scott was born in the Highlands of Scotland and educated at Inverness Royal Academy and the Royal Scottish Academy of Music and Drama. She has worked in theater and in magazines, and is currently writing the next book in the acclaimed Highland Gazette mystery series.
Loading...
or support indie stores by buying on