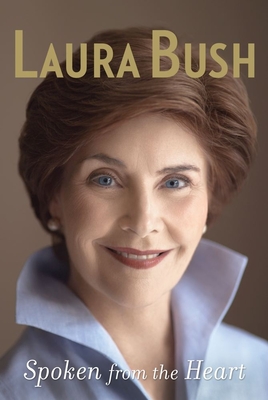 Spoken from the Heart

Praise For Spoken from the Heart…

“Mrs. Bush’s delicate rendering . . . sets this book far apart from the typical score-settling reminiscences of politicians or their spouses. . . . Spoken from the Heart reveals Laura Bush to be a beautiful writer, a keen observer and a tender soul who drew on her roots to live a life in the public eye with compassion and grace.”—Wall Street Journal

“This is Laura Bush, unplugged. . . . She comes across with a keener eye, a sharper tongue and a readier laugh than in interviews during the eight years while her husband was president.”—USA Today

“A deeply felt, keenly observed account of her childhood and youth in Texas—an account that captures a time and place with exacting emotional precision and that demonstrates how Mrs. Bush’s lifelong love of books has imprinted her imagination.”—New York Times

“Laura Bush writes as vividly of her upbringing in the bleak and unforgiving oil-patch towns of West Texas as Buzz Bissinger did in his classic Friday Night Lights.”—Bloomberg

Laura Bush was First Lady of the United States from 2001 to 2009. She founded both the National Book Festival and the Texas Book Festival.