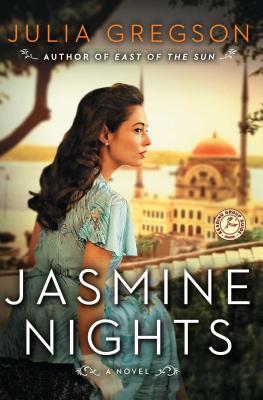 From the award-winning author of East of the Sun, a powerful love story set against the unstable and exotic cities of Cairo and Istanbul during the height of World War II.

At twenty-three, Saba Tarcan knows her only hope of escaping the clamor of Cardiff Bay, Wales, lies in her voice. While traveling Britain, singing for wounded soldiers, Saba meets handsome fighter pilot Dom Benson, recovering from burns after a crash. When Saba auditions to entertain troops in far-off lands, Dom follows her to London. Just as their relationship begins to take root, Saba is sent to sing in Africa, and Dom is assigned a new mission in the Middle East. As Saba explores Cairo’s bazaars, finding friendship among the troupe’s acrobats and dancers, Dom returns to the cockpit once again, both thrilled and terrified to be flying above the desert floor. In spite of great danger, the two resolve to reunite.

When Saba learns that her position makes her uniquely qualified for a secret mission of international importance, she agrees to help the British Secret Service, concealing her role from Dom. Her decision will jeopardize not only her safety but also the love of her life.

Based on true accounts of female entertainers used as spies during World War II, Jasmine Nights is a powerful story of danger, secrets, and love, filled with the colors and sounds of the Middle East’s most beautiful cities.

Praise For Jasmine Nights: A Novel…

“Gregson, the author of East of the Sun and Band of Angels, brings a wealth of detail to this unconventional love story, ranging from World War II history to rich cultural lore to the pop-music standards of the era. With numerous and well-drawn characters, evocative prose and a commanding story, the former journalist and foreign correspondent again proves that she is also a master of historical fiction. And smoke might not be the only thing that gets in your eyes in this moving novel.”
— Richmond Times-Dispatch

“Gregson shines in her descriptions of the life of the rich, poor and combatant in Cairo and Alexandria, the sights of Giza and the Bosphorus, and the chaotic World War II milieu where women no longer tolerated 'boys making all the rules.' Saba and Dom love, face perils, triumph and intermittently reunite….the story flows at a stately pace to a conclusion both satisfying and open-ended. Fans will want a sequel.”
— Kirkus Reviews

“For a history lesson on WWII, watch Ken Burns’ The War. For romance and intrigue, with the conflict providing the perfect excuse to set a story in exotic locales like Cairo, Gregson (East of the Sun, 2009) delivers in spades… Credit is due Gregson…for crafting a story about a much-chronicled war that feels thoroughly original.”
— Booklist

“This steamy, sweeping historical draws readers into the seductive world of WWII Egypt…Gregson’s latest (after Band of Angels) displays the author’s command of wartime fiction. Saba is a modern woman struggling with old-fashioned ideas and Dom is a surprisingly complex hero. Seen through their eyes, the wartime Middle East is a heady, intoxicating place and readers will be swept away by the lush prose.”
— Publishers Weekly

“A wonderful romance and adventure story about two passionate young people determined to live life to the fullest, knowing they may not live to see tomorrow… The contrast of the glamorous, exotic setting with the gritty reality of life in a war zone was compelling and made for a great read. Not to be missed.”--Historical Novel Society

“A wonderful romance and adventure story about two passionate young people determined to live life to the fullest, knowing they may not live to see tomorrow… The contrast of the glamorous, exotic setting with the gritty reality of life in a war zone was compelling and made for a great read. Not to be missed.”--Historical Novel Society

Julia Gregson has worked as a journalist and foreign correspondent in the UK, Australia, and the US. She is the author of East of the Sun, which was a major bestseller in the UK and won the Romantic Novel of the Year Prize and the Le Prince Maurice Prize there, and Monsoon Summer. Her short stories have been published in collections and magazines and read on the radio. She lives in Monmouthshire, Wales.
Loading...
or support indie stores by buying on