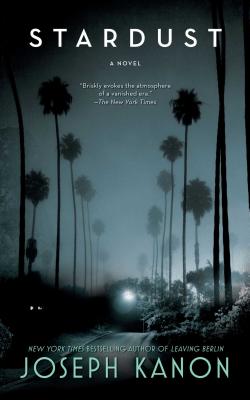 “I always look forward to a new Joseph Kanon novel, and Stardust does not disappoint. This novel of Hollywood, political intrigue, and the beginning of the McCarthy era should fascinate every reader who cares about the darker sides of America. And, as always, Kanon's writing is superb.”
— Deal Safrit, Literary Book Post, Salisbury, NC
View the List

Hollywood, 1945. Ben Collier has just arrived from war-torn Europe to find his brother has died in mysterious circumstances. Why would a man with a beautiful wife, a successful movie career, and a heroic past choose to kill himself?

Ben enters the uneasy world beneath the glossy shine of the movie business, where politics and the dream factories collide and Communist witch hunts are rendering the biggest star makers vulnerable. Even here, where the devastation of Europe seems no more real than a painted movie set, the war casts long and dangerous shadows. When Ben learns troubling facts about his own family’s past and embarks on a love affair that never should have happened, he is caught in a web of deception that shakes his moral foundation to its core.

Rich with atmosphere and period detail, Stardust flawlessly blends fact and fiction into a haunting thriller evoking both the glory days of the movies and the emergence of a dark strain of American political life.

Praise For Stardust: A Novel…

“Kanon operates with an intelligence that briskly evokes the atmosphere of a vanished era.”
— The New York Times

“The kind of story that demands fog and wisps of cigarette smoke, Humphrey Bogart and Ingrid Bergman, elegance and bespoke tailoring cozied right up to the bloodstains and betrayal.”

“Sharp prose that’s punched up by lines worthy of Bogart or Mitchum.”
— The Washington Post

“Electric. . . . The dialogue is pitch-perfect, a kind of jazzy patter that feels filmic itself.”
— The Sunday Oregonian

“Kanon knows his way around a good story.”
— USA Today

“Comes within a whisker of being flawless.”
— Kirkus Reviews

Joseph Kanon is the Edgar Award–winning author of The Accomplice, Defectors, Leaving Berlin, Istanbul Passage, Los Alamos, The Prodigal Spy, Alibi, Stardust, and The Good German, which was made into a major motion picture starring George Clooney and Cate Blanchett. He lives in New York City.