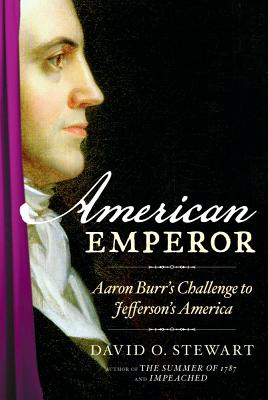 In this vivid and brilliant biography, David Stewart describes Aaron Burr, the third vice president, as a daring and perhaps deluded figure who shook the nation’s foundations in its earliest, most vulnerable decades.

In 1805, the United States was not twenty years old, an unformed infant. The government consisted of a few hundred people. The immense frontier swallowed up a tiny army of 3,300 soldiers. Following the Louisiana Purchase, no one even knew where the nation’s western border lay. Secessionist sentiment flared in New England and beyond the Appalachians.

Burr had challenged Jefferson, his own running mate, in the presidential election of 1800. Indicted for murder in the dueling death of Alexander Hamilton in 1804, he dreamt huge dreams. He imagined an insurrection in New Orleans, a private invasion of Spanish Mexico and Florida, and a great empire rising on the Gulf of Mexico, which would swell when America’s western lands seceded from the Union. For two years, Burr pursued this audacious dream, enlisting support from the General-in-Chief of the Army, a paid agent of the Spanish king, and from other western leaders, including Andrew Jackson. When the army chief double-crossed Burr, Jefferson finally roused himself and ordered Burr prosecuted for treason.

The trial featured the nation’s finest lawyers before the greatest judge in our history, Chief Justice John Marshall, Jefferson’s distant cousin and determined adversary. It became a contest over the nation’s identity: Should individual rights be sacrificed to punish a political apostate who challenged the nation’s very existence? In a revealing reversal of political philosophies, Jefferson championed government power over individual rights, while Marshall shielded the nation’s most notorious defendant. By concealing evidence, appealing to the rule of law, and exploiting the weaknesses of the government’s case, Burr won his freedom.

Afterwards Burr left for Europe to pursue an equally outrageous scheme to liberate Spain’s American colonies, but finding no European sponsor, he returned to America and lived to an unrepentant old age.

Stewart’s vivid account of Burr’s tumultuous life offers a rare and eye-opening description of the brand-new nation struggling to define itself.

“A proven storyteller, David O. Stewart takes us on a wonderful journey back to a fascinating chapter of American life: the challenges and controversies embodied in Aaron Burr. American Emperor is a great tale.”
--Jon Meacham, author of American Lion: Andrew Jackson in the White House

“A luminous portrait of Aaron Burr as well as the first high-definition picture of an endlessly baffling, infuriating, and mesmerizing life.”
--Patricia O’Toole, When Trumpets Call: Theodore Roosevelt after the White House

“Aaron Burr is the American Lucifer, a figure of immense talents and heroic qualities whose voracious ambition thrust him into a position as adversary to the goodness around him. David Stewart captures this tale in all its drama, treachery, and historical dimension. This is a truly absorbing narrative.”
--Robert W. Merry, author of A Country of Vast Designs: James K. Polk, the Mexican War and the Conquest of the American Continent

“The generation of the Founders produced some intriguing characters, but Aaron Burr has to be the most charismatic, quixotic, and mysterious. David Stewart brings the scheming, brilliant Burr to life in this lively but also judicious portrait of grand and unfulfilled ambition.”
--Evan Thomas, author of The War Lovers: Roosevelt, Lodge, Hearst, and the Rush to Empire, 1898

“With remarkable evenhandedness and superb pacing, David O. Stewart has given us a real Aaron Burr and a real Thomas Jefferson in a gripping narrative about a political adventure that might have changed the history of the United States and Mexico.”
--Thomas Fleming, author of Duel: Aaron Burr, Alexander Hamilton and the Future of America

“Stewart’s sympathetic but unapologetic study of the enigmatic Burr…transcends its subject in exposing the frailty of early America’s westward ambitions. Highly recommended for readers of Revolutionary-era biographies and early U.S. history.” –Library Journal

“A fresh, vivid exploration of the exploits and trial of Aaron Burr… Two parts adventure story and one part courtroom thriller… A persuasive, engaging examination of the post-political career of a shadowy and much-maligned figure from the era of the Founders.” –Kirkus Reviews (Starred)

“Great men behaving badly makes for entertaining reading…[this book] will keep [readers] turning the pages of this meticulous, almost day-by-day account of a plot so bizarre that it’s hard to believe it actually happened.” –Publishers Weekly

“Stewart strives admirably to sort through the maze of facts and speculations about the nature of the conspiracy and Burr’s place in it. This is also a personality study of Burr, in whom Stewart sees an extraordinary combination of talent, vision, arrogance, and insatiable ambition….readers should enjoy this account of a dangerous episode that threatened our young republic.” –Booklist

“American Emperor offers a compelling, provocative portrait of Aaron Burr….a skilled historian and a splendid storyteller, Stewart makes the most of the episode and its…cast of characters.” —Kansas City Star

"American Emperor" is a rousing book (who can turn down a quixotic rebellion?) with a cast of characters that could slip comfortably into a three-volume melodrama of the 19th century.“ —Richmond Times-Dispatch

“Thoughtful, stylishly written and splendidly researched…. Adds valuable dimensions to our appreciation of the world we inherited from the Founders.… A page-turner as well!” —Washington Independent Review of Books

“A rattling tale… While most readers know the broad outlines of the Aaron Burr story…, the tale still retains ample suspense. I won’t spoil the ending.” —Christian Science Monitor
or
Not Currently Available for Direct Purchase
Copyright © 2020 American Booksellers Association