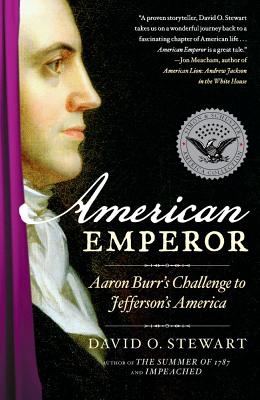 In this vivid and brilliant biography, David Stewart describes Aaron Burr, the third vice president, as a daring and perhaps deluded figure who shook the nation’s foundations in its earliest, most vulnerable decade.

In this vivid and brilliant biography, David O. Stewart portrays Aaron Burr, the third vice president, as a daring and perhaps deluded figure who shook the nation’s foundations in its earliest, most vulnerable decade. Stewart’s vivid account of Burr’s tumultuous life offers a rare and eye-opening description of the brand-new nation struggling to define itself.

“A proven storyteller, David O. Stewart takes us on a wonderful journey back to a fascinating chapter of American life: the challenges and controversies embodied in Aaron Burr. American Emperor is a great tale.”

“A luminous portrait of Aaron Burr as well as the first high-definition picture of an endlessly baffling, infuriating, and mesmerizing life.”

“Aaron Burr is the American Lucifer, a figure of immense talents and heroic qualities whose voracious ambition thrust him into a position as adversary to the goodness around him. David Stewart captures this tale in all its drama, treachery, and historical dimension. This is a truly absorbing narrative.”


--Robert W. Merry, author of A Country of Vast Designs: James K. Polk, the Mexican War and the Conquest of the American Continent

“The generation of the Founders produced some intriguing characters, but Aaron Burr has to be the most charismatic, quixotic, and mysterious. David Stewart brings the scheming, brilliant Burr to life in this lively but also judicious portrait of grand and unfulfilled ambition.”

--Evan Thomas, author of The War Lovers: Roosevelt, Lodge, Hearst, and the Rush to Empire, 1898

“With remarkable evenhandedness and superb pacing, David O. Stewart has given us a real Aaron Burr and a real Thomas Jefferson in a gripping narrative about a political adventure that might have changed the history of the United States and Mexico.”

“Stewart’s sympathetic but unapologetic study of the enigmatic Burr…transcends its subject in exposing the frailty of early America’s westward ambitions. Highly recommended for readers of Revolutionary-era biographies and early U.S. history.” –Library Journal

“A fresh, vivid exploration of the exploits and trial of Aaron Burr… Two parts adventure story and one part courtroom thriller… A persuasive, engaging examination of the post-political career of a shadowy and much-maligned figure from the era of the Founders.” –Kirkus Reviews (Starred)

“Great men behaving badly makes for entertaining reading…[this book] will keep [readers] turning the pages of this meticulous, almost day-by-day account of a plot so bizarre that it’s hard to believe it actually happened.” –Publishers Weekly

“Stewart strives admirably to sort through the maze of facts and speculations about the nature of the conspiracy and Burr’s place in it. This is also a personality study of Burr, in whom Stewart sees an extraordinary combination of talent, vision, arrogance, and insatiable ambition….readers should enjoy this account of a dangerous episode that threatened our young republic.” –Booklist

“American Emperor offers a compelling, provocative portrait of Aaron Burr….a skilled historian and a splendid storyteller, Stewart makes the most of the episode and its…cast of characters.” —Kansas City Star