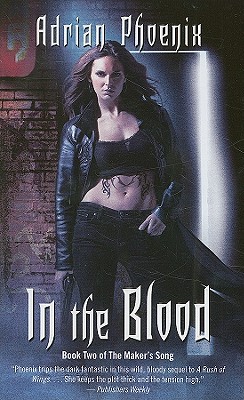 Book Two of the Maker's Song

Vampire. Rock star. Begotten son of the fallen angel Lucien. Dante Baptiste still struggles with nightmares and seizures, searching for the truth about his past. It is a quest as seductive as his kiss, as uncontrollable as his thirst, and as unforgiving as his determination to protect one mortal woman at any cost.

FBI Special Agent Heather Wallace now knows the extent of the Bureau corruption that surrounds her, but worries she is losing the battle. And when Dante and his band Inferno come to Seattle on tour, Heather can't help but be drawn back to the beautiful, dangerous nightkind. But what Heather and Dante don't know is that new enemies lurk in the shadows, closer than they think...and even deadlier than they fear.

Shadowy government forces have pledged to eliminate all loose ends from Project Bad Seed -- and Heather and Dante are at the top of the list. Elsewhere, the Fallen gather in Gehenna, intent on finding their long-awaited savior, the True Blood nightkind whom Lucien DeNoir would die to protect. And a damaged and desperate adversary, with powers as strange and perilous as Dante's own, plots to use Dante as a pawn in a violent scheme for revenge. But only one of these lethal forces holds the key to Dante's past -- a key that could finally unlock the secret of his birth and the truth of his existence...or destroy him completely.

Adrian Phoenix lives in Oregon with her three cats and travels to New Orleans whenever possible.
Loading...
or support indie stores by buying on
(This book is on backorder)