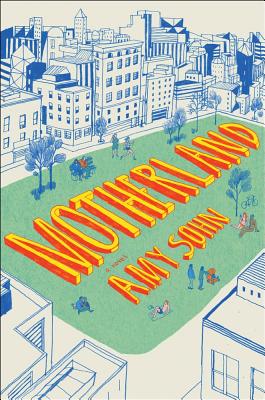 In her acclaimed novels, Amy Sohn has beguiled us with her pinpoint observations of how we live and love, giving voice to our innermost thoughts and everyday anxieties. Now, in Motherland, her most diverting book to date, she introduces us to five mothers and fathers in Cape Cod, Park Slope, and Greenwich Village who find themselves adrift professionally and personally.

Rebecca Rose, whose husband has been acting aloof, is tempted by the attentions of a former celebrity f lame; Marco Goldstein, saddled with two kids when his husband, Todd, is away on business, turns to anonymous sex for comfort; Danny Gottlieb, a screenwriter on the cusp of a big break, leaves his wife and children to pitch a film (and meet young women) in Los Angeles; fallen sanctimommy Karen Bryan Shapiro, devastated by her husband’s infidelity and abandonment, attempts a fresh start with a hot single dad; and former A-list actress Melora Leigh plots a star turn on Broadway to revive her Hollywood career. As their stories intersect in surprising ways and their deceptions spiral out of control, they begin to question their beliefs about family, happiness, and themselves.

Equal parts moving and richly entertaining, Motherland is a fresh take on modern marriage that confirms Amy Sohn as one of our most insightful commentators on relationships and parenting in America today.

Amy Sohn’s novels include Prospect Park West and Motherland. Her articles have appeared in New York, Harper’s Bazaar, Playboy, and The Nation. She lives in Brooklyn with her family.

Praise For Motherland: A Novel…

“While Sohn’s sharp, hilarious tale satirizes these affluent, artsy Brooklyn archetypes and their fickle yet predictable Hollywood counterparts, it also explores the waning of passion, the angst of being housebound with kids, and the despair of watching your spouse morph from best friend to apathetic, angry, or needy adversary . . . [Motherland] keeps you hooked—and cackling—until its surprisingly resonant final lines.” —Cathi Hanauer, ELLE

“Sohn provides more than a soupcon of sardonic pleasure. . . .There’s lots of sex (with everyone but spouses), illicit pot-smoking, dubious career moves, hilarious social commentary and clever twists and turns in Motherland—making it a perfect last-minute beach read before fall arrives.”

“A heartfelt and hauntingly true reflection of what it is to be a modern parent. . . .Expect to be hooked.”

“A juicy, diverting look at the private lives of hip, urban parents, Motherland is filled with witty and wise observations about sex, marriage, parenthood, and fidelity. I live in the exact part of Brooklyn Amy Sohn describes, and now I can't stop wondering what my neighbors are up to behind closed doors.” —J. Courtney Sullivan, author of Commencement and Maine

“Hilarious, smart, razor-sharp and spot-on, Amy Sohn’s Motherland is a sheer pleasure to read. Did I say riveting? I stayed up long past my bedtime, immersed in the lives of these characters, needing to know how it all turned out.” —Dani Shapiro, author of Devotion and Family History

“Sohn is clearly culturally savvy, and her dialogue is often witty and at times spot-on.” —Booklist
or
Not Currently Available for Direct Purchase
Copyright © 2020 American Booksellers Association