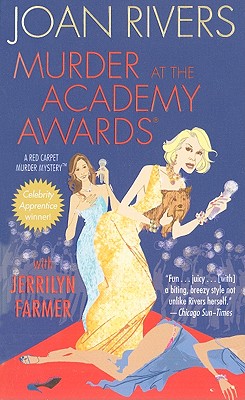 There’s no one better equipped than the tart-tongued Maxine Taylor to hold court on the star-studded red carpet. But when Halsey Hamilton—young, fabulous, and fresh out of rehab—stumbles up to the mic, slurs a few cryptic words, and drops dead at the hem of Max’s stunning Michael Kors gown, Max must embark on an undercover twelve-step investigation and find Halsey’s killer in this smart, bracingly funny, and über-stylish mystery.

Joan Rivers was an American comedian, actress, talk show host, businesswoman, and celebrity. She was known for her brash manner and loud, raspy voice with a heavy metropolitan New York accent. Rivers was the National Chairwoman of the Cystic Fibrosis Foundation and is a board member of God's Love We Deliver. Like the ground-breaking Phyllis Diller, Rivers's act relied heavily on poking fun at herself. She died in 2014.

Praise For Murder at the Academy Awards (R): A Red Carpet Murder Mystery…

"My friend Joan Rivers has 'murdered' more people at the Academy Awards¨ than anyone else -- and made us all laugh in the process. Now she's written a murder mystery and it's her best show yet." -- Regis Philbin

"Joan Rivers has always made me laugh, and she's done it again -- this time as a writer! Murder at the Academy Awards¨ is very funny and very smart, with a clever plotline that probes deep under Hollywood's famous red carpet. It's suspenseful, provocative, and filled with Joan's inimitable voice and humor." -- Barbara Taylor Bradford, author of A Woman of Substance and Being Elizabeth

"Can we talk...murder? Only the outrageous Ms. Rivers could bring blood to the Red Carpet in such high style while giving us the lowdown on Hollywood!" -- Jane Dentinger, Editor in Chief, Mystery Guild

"Fun...juicy...[with] a biting, breezy style not unlike Rivers herself." -- Chicago Sun-Times

"Miss Marple in Manolos, Bond with a boob job.... The fun is in detecting where the fictional Maxine stops and Rivers begins." -- New York Daily News
or
Not Currently Available for Direct Purchase
Copyright © 2020 American Booksellers Association