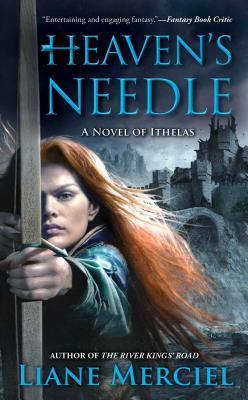 The mountain fortress of Duradh Mal was mysteriously destroyed centuries ago. And now, in its shadow, evil stirs. . . .

Unaware of the danger, two inexperienced Illuminers set out for the village of Carden Vale, at the foot of Duradh Mal, to minister to the people. The warrior Asharre, her face scarred with runes, her heart scarred by loss, is assigned to protect the young clerics. But in Carden Vale they find unspeakable horrors—the first hint of a terrifying ghost story come true.

The Sun Knight Kelland has been set free by the woman he loves, the archer Bitharn, but at the cost of undertaking a mission only he can fulfill. Joined by a Thornlord steeped in the magic of pain, they too make their way to Duradh Mal. There lies the truth behind the rumors of the dead come back to life, flesh ripped from bones, and creatures destroying themselves in a violent frenzy. And if Kelland cannot contain the black magic that has been unleashed after six hundred years, an entire world will fall victim to a Mad God’s malevolent plague. . . .

Liane Merciel spent most of her childhood bouncing around the world as an Army brat. She has lived in Alaska, Germany, and Korea, and has gone camping in every one of the fifty states. Her hobbies include yoga, training rats, and baking cupcakes capable of sending the Stay-Puft Marshmallow Man into sugar shock with one bite. Currently she lives and practices law in Philadelphia.

"Liane Merciel's second novel set in the world of Ithelas comes factory-equipped with the deluxe High-Fantasy options package: a Manichean conflict between the virtuous priests of sunlight and the evil practitioners of blood-magic we met in the first book, The River King's Road. But Merciel tweaks the formula — and deepens her storytelling — by introducing a third element: a plague of pure chaos capable of tempting noble knight and nasty necromancer alike into despair, madness and unspeakable violence... Merciel splinters her narrative and discretely parcels out clues to the mystery so that the reader stays one step ahead of her characters — and watches in mute horror as they blunder into situations that could cost them their very souls." -- NPR.com
or
Buy Here
(This book is on backorder)
Copyright © 2020 American Booksellers Association