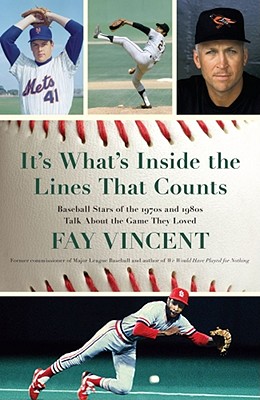 It's What's Inside the Lines That Counts

It's What's Inside the Lines That Counts brings together ballplayers, managers, an umpire, and the first head of the players' union to describe the momentous changes to the game that took place in the 1970s and 1980s. Former MLB commissioner Fay Vincent draws from his ongoing oral history of the game to celebrate the era that spans the Miracle Mets through free agency to Cal Ripken's historic consecutive-games streak. Willie McCovey remembers meeting the Giants' other Willie and the powerful impact that Willie Mays had on him. He expresses pride that the Giants chose to honor him at their ballpark with McCovey Cove. Teammate Juan Marichal, one of baseball's Latino pioneers, recalls encountering racism for the first time in America. He recounts fortuitously overhearing a conversation among Latino ballplayers before a Giants-Pirates game that provided him with crucial information about Roberto Clemente. Managers Dick Williams and Earl Weaver assess their Hall of Fame careers. Williams remembers his contentious relationship with Charlie Finley and explains why he never managed for George Stein-brenner. Earl Weaver says he has changed, that umpires were "fantastic people," and that he shouldn't have gotten thrown out of so many ballgames. Read it here for yourself. Tom Seaver, one of the dominant pitchers of his era, shares a funny incident from his first All-Star game, when he was young and looked even younger, and discloses the important piece of baseball wisdom that Gil Hodges gave him early in his career that has guided him ever since. Don Baylor recalls playing with a variety of teammates and teams, including the remarkable experience of playing in three consecutive World Series with three different teams, going from the 1986 Red Sox that came so close to winning the Series to the 1987 Minnesota Twins team that actually did it. Hall of Famer Ozzie Smith, "the Wizard of Oz," tells the story of how he began his signature back flip and offers insights into how he was able to pull off some of the most spectacular defensive plays in baseball history. Baseball's Iron Man Cal Ripken remembers the high expectations that came with being the son of a baseball manager and explains why the "Orioles way" was more than just a slogan for him. Bruce Froemming, MLB's longest-serving umpire, reveals the rules behind the fine art of allowing managers and coaches to have their say and still maintain absolute control over the game. And Marvin Miller, one of the most important figures in the history of the game, explains the origins and intentions of baseball's players' union and why he is so proud of what it has achieved. No fan of the game will want to pass up this illustrated, fascinating remembrance of two decades when baseball changed forever.

Praise For It's What's Inside the Lines That Counts: Baseball Stars of the 1970s and 1980s Talk about the Game They Loved (Baseball Oral History Project #3)…