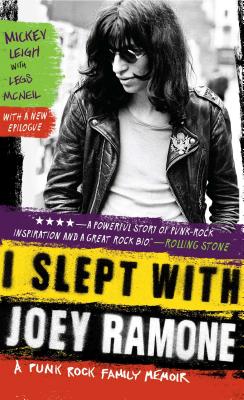 I Slept with Joey Ramone

“A powerful story of punk-rock inspiration and a great rock bio” (Rolling Stone), now in paperback.

When the Ramones recorded their debut album in 1976, it heralded the true birth of punk rock. Unforgettable front man Joey Ramone gave voice to the disaffected youth of the seventies and eighties, and the band influenced the counterculture for decades to come. With honesty, humor, and grace, Joey’s brother, Mickey Leigh, shares a fascinating, intimate look at the turbulent life of one of America’s greatest—and unlikeliest—music icons. While the music lives on for new generations to discover, I Slept with Joey Ramone is the enduring portrait of a man who struggled to find his voice and of the brother who loved him.

Praise For I Slept with Joey Ramone: A Punk Rock Family Memoir…

"Joey Ramone kick started my career as a singer ... blame him." -- Bono

"Mickey's cool new book is not only important, it's very, very moving. Joey's overcoming incredible adversity to be the lead singer in one of the greatest and most influential Rock bands of all time will be an inspiration for every kid that doesn't quite "fit it." -- Steven Van Zandt

"Mickey Leigh's story makes for compelling reading. I Slept With Joey Ramone is funny, sad, shocking and surprising and best of all, brutally honest." -- John Holmstrom, Co-founder of PUNK Magazine

Mickey Leigh, born Mitch Hyman, has been a major player in the rock n roll world since the late seventies. He was a major contributor to the music of The Ramones and has been in several bands, including The Rattlers, which included the (in)famous Lester Bangs. He currently lives in New York.