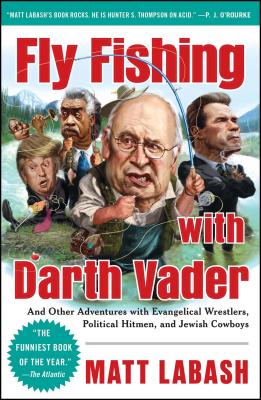 And Other Adventures with Evangelical Wrestlers, Political Hitmen, and Jewish Cowboys

One of the most gifted and entertaining journalists writing today, Matt Labash can extract comic humanity from even the most wary politicians, con artists, and rogues--while shedding wisdom about the rich corners of our American experience. Fly Fishing with Darth Vader pulls together the best of Labash's feature writing and includes his masterful profiles of the outrageous characters who populate America's periphery, his loving and lacerating portraits of New Orleans and Detroit, and his hilarious tirades on the health hazards of Facebook and the virtues of dodgeball. Among other must-read essays, Labash chronicles Al Sharpton's eating habits, fishes the Snake River with Dick Cheney, and investigates the "great white waste of time" that is our neighbor to the north. Labash was born with a natural appreciation for the American scoundrel and a sense that life is one big chance for laughter. For those reasons, Fly Fishing with Darth Vader will be cherished and talked about for years.

Praise For Fly Fishing with Darth Vader: And Other Adventures with Evangelical Wrestlers, Political Hitmen, and Jewish Cowboys…

“Consistently one of the best magazine writers in the country.” — David Brooks, The New York Times

“I started reading Matt Labash because I was beginning to be afraid that the devil had all the best tunes: now it's the tunes themselves by which I am seduced.” — Christopher Hitchens

“Matt Labash is, simply put, one of the best journalists in the country. He's a brilliant writer—hilarious, profound and sharp as an X-Acto. His prose can do the impossible—even humanize Dick Cheney.” — A.J. Jacobs

“In a just world, Matt Labash would be celebrated as the heir to Tom Wolfe, Hunter Thompson and other writers in the 1960s and 1970s who were corralled under the rubric of ‘new journalism’. . . . Like the best of the new-journalism practitioners, Mr. Labash inhabits a story so thoroughly that readers feel as if they're at his side, seeing events with his sharp eye, privy to his wisecracks, savoring moments when he reels in what feels like the truth.” —Mark Lasswell, Wall Street Journal

“Every now and then, a collection of remarkable stories from a magazine writer has the effect of unleashing a significant new voice on an unsuspecting public. Tom Wolfe's Kandy-Kolored Tangerine-Flake Streamline Baby comes to mind. And so it is with Matt Labash's wonderful Fly Fishing with Darth Vader." —Mark Warren, Esquire