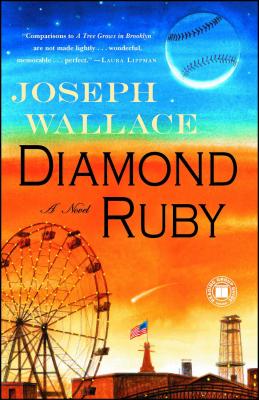 Seventeen-year-old Ruby Thomas, newly responsible for her two young nieces after a devastating tragedy, is determined to keep her family safe in the vast, swirling world of 1920s New York City. She’s got street smarts, boundless determination, and one unusual skill: the ability to throw a ball as hard as the greatest pitchers in a baseball-mad city.

From Coney Island sideshows to the brand-new Yankee Stadium, Diamond Ruby chronicles the extraordinary life and times of a girl who rises from utter poverty to the kind of renown only the Roaring Twenties can bestow. But her fame comes with a price, and Ruby must escape a deadly web of conspiracy and threats from Prohibition rumrunners, the Ku Klux Klan, and the gangster underworld.

Diamond Ruby “is the exciting tale of a forgotten piece of baseball’s heritage, a girl who could throw with the best of them. A real page-turner, based closely on a true story” (Kevin Baker, author of Strivers Row).

Praise For Diamond Ruby: A Novel…

“Comparisons to A Tree Grows in Brooklyn are not made lightly . . . wonderful, memorable . . . perfect.”
—Laura Lippman

"Diamond Ruby is the exciting tale of a forgotten piece of baseball's heritage, a girl who could throw with the best of them. A real page-turner, based closely on a true story." -- Kevin Baker, author of Strivers Row

“Diamond Ruby is a gem! Moving, fascinating, and ultimately exhilarating.
I loved it!” —S. J. Rozan, Edgar Award–winning author of The Shanghai Moon

"Diamond Ruby is a gem! From the first page I found myself caring deeply about Wallace's idiosyncratic characters, rooting for them as they made their way through a world so skillfully portrayed that though it was new to me I felt right at home. Moving, fascinating, and ultimately exhilarating. I loved it!" -- SJ Rozan, Edgar-winning author of The Shanghai Moon

"Babe Ruth and Jack Dempsey may loom among the many appealing, larger-than-life characters who show up in this wonderfully fun novel of baseball and 1920's Brooklyn, but readers will be especially dazzled and charmed by Diamond Ruby herself. It really IS A Tree Grows in Brooklyn meets Ragtime! Joseph Wallace has walloped a homer right out of the park!" -- Katharine Weber, author of True Confections and Triangle

"Diamond Ruby is a very special book. The comparisons to A Tree Grows in Brooklyn are not made lightly: Joseph Wallace deserves that accolade and many more. Ruby is a wonderful, memorable character and Wallace's prose is a perfect match for her." -- Laura Lippman, New York Times bestselling author of Life Sentences and What the Dead Know

“Lively and entertaining…includes all sorts of colorful characters and fascinating social history…the story of an unassuming, courageous young woman who uses the national pastime to become a pioneering heroine in a man’s world.”

Joseph Wallace is a baseball historian and author of four previous non-fiction books about baseball as well as many short stories published in book anthologies and Ellery Queen's Mystery Magazine.  He lives with his wife and two children in Westchester County, New York.
Loading...
or
Not Currently Available for Direct Purchase