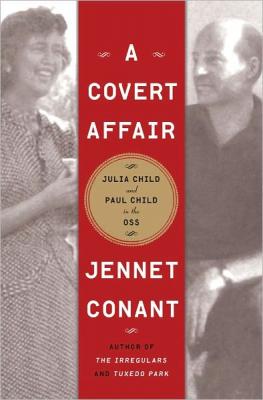 Julia Child and Paul Child in the OSS

“Long before she could cook, Julia Child and her future husband were stirring up adventure together in the OSS. In A Covert Affair, Conant uncovers a tale of intrigue and detente, both professional and personal. All the ingredients of a fun thriller are here: plenty of bad guys, lots of Bond-type girls, double-crosses, and threats from everywhere, plus action in jungles, cities, deserts. The woman who is best known for taking down a chicken with a knife even has a one-on-one unarmed battle with a rogue elephant!”
— Geoffrey Jennings, Next Chapter Bookshop, Mequon, WI
View the List

“Long before she could cook, Julia Child and her future husband were stirring up adventure together in the OSS. In A Covert Affair, Jennet Conant uncovers a tale of intrigue and detente, both professional and personal. All the ingredients of a fun thriller are here: plenty of bad guys, lots of Bond-type girls, double-crosses, and threats from everywhere, plus action in jungles, cities, deserts. The woman who is best known for taking down a chicken with a knife even has a one-on-one unarmed battle with a rogue elephant!”
— Geoffrey Jennings, Rainy Day Books, Fairway, KS
View the List

Bestselling author Jennet Conant brings us a stunning account of Julia and Paul Child’s experiences as members of the Office of Strategic Services (OSS) in the Far East during World War II and the tumultuous years when they were caught up in the McCarthy Red spy hunt in the 1950s and behaved with bravery and honor. It is the fascinating portrait of a group of idealistic men and women who were recruited by the citizen spy service, slapped into uniform, and dispatched to wage political warfare in remote outposts in Ceylon, India, and China.

The eager, inexperienced 6 foot 2 inch Julia springs to life in these pages, a gangly golf-playing California girl who had never been farther abroad than Tijuana. Single and thirty years old when she joined the staff of Colonel William Donovan, Julia volunteered to be part of the OSS’s ambitious mission to develop a secret intelligence network across Southeast Asia. Her first post took her to the mountaintop idyll of Kandy, the headquarters of Admiral Lord Louis Mountbatten, the supreme commander of combined operations. Julia reveled in the glamour and intrigue of her overseas assignment and lifealtering romance with the much older and more sophisticated Paul Child, who took her on trips into the jungle, introduced her to the joys of curry, and insisted on educating both her mind and palate. A painter drafted to build war rooms, Paul was a colorful, complex personality. Conant uses extracts from his letters in which his sharp eye and droll wit capture the day-to-day confusion, excitement, and improbability of being part of a cloak- and-dagger operation.

When Julia and Paul were transferred to Kunming, a rugged outpost at the foot of the Burma Road, they witnessed the chaotic end of the war in China and the beginnings of the Communist revolution that would shake the world. A Covert Affair chronicles their friendship with a brilliant and eccentric array of OSS agents, including Jane Foster, a wealthy, free-spirited artist, and Elizabeth MacDonald, an adventurous young reporter. In Paris after the war, Julia and Paul remained close to their intelligence colleagues as they struggled to start new lives, only to find themselves drawn into a far more terrifying spy drama. Relying on recently unclassified OSS and FBI documents, as well as previously unpublished letters and diaries, Conant vividly depicts a dangerous time in American history, when those who served their country suddenly found themselves called to account for their unpopular opinions and personal relationships.

Praise For A Covert Affair: Julia Child and Paul Child in the OSS…

Praise for A Covert Affair

“Jennet Conant’s A Covert Affair is an absolutely top-class work of the true-spy genre; elegantly written, authentic, exceptionally sophisticated, and not at all what you might expect of a book with a picture of Julia Child on the cover. This ain’t about cooking.”

--Alan Furst, author of Spies of the Balkans

Praise for The Irregulars

“What critics praise most in Jennet Conant’s The Irregulars is the quality that is becoming the author’s signature knack: her ability to show how a seemingly obscure group of characters personifies the mood of a time and place and exercises more influence than one might expect…. Expert writing and research. ”

“What more could you want from a book? Here is a discussion of propaganda and covert actions written with text-book clarity. Salacious gossip about the upper circles of Washington’s political and media community. A writing style that has one racing from page to page, eager to soak in more details. I thump my desk with glee over Jennet Conant’s The Irregulars…. A truly fascinating book.”

“As was true of her excellent first book, Tuxedo Park, in The Irregulars [Conant] removes the dust of history. … Entertaining and instructive.”

“Remarkable and remarkably told, as if F. Scott Fitzgerald had penned Batman.”

“A must read for all fans of World War II history. It will captivate. ”
--Businessweek

Jennet Conant is the author of Man of the Hour: James B. Conant, Warrior Scientist and the New York Times bestsellers The Irregulars: Roald Dahl and the British Spy Ring in Wartime Washington and Tuxedo Park: A Wall Street Tycoon and the Secret Palace of Science That Changed the Course of World War II. She has written for Vanity Fair, Esquire, GQ, Newsweek, and The New York Times. She lives in New York City and Sag Harbor, New York.
Loading...
or
Not Currently Available for Direct Purchase