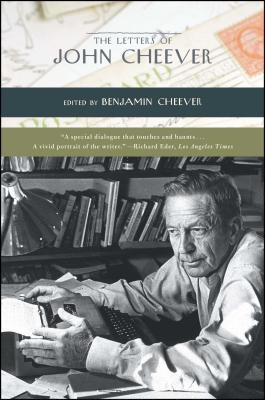 The Letters of John Cheever (Paperback)

• A revealing self-portrait: In addition to his novels and short stories, John Cheever wrote a prodigious number of letters—sometimes thirty in a week. In The Letters of John Cheever , edited and annotated by his son Benjamin, Cheever reveals his most private thoughts to friends, famous writers, family, and lovers—all of whom he encouraged to discard what he wrote. “Saving letters is like trying to preserve a kiss,” he said. As a result, these letters form a story that is even more candid than his journals, and as vivid and human as any he ever invented..

• An intriguing literary icon: Cheever, a complex and contradictory man, “was an adulterer who wrote eloquently in praise of monogamy … a bisexual who detested any sign of sexual ambiguity.” Cheever was a stranger to those closest to him and presented to the world what he thought it wanted to see. These letters display the stark contrast between his ambitions and weaknesses, while tracing his evolution as an artist. .

John Cheever, novelist, short-story writer, and winner of the National Book Award and the Pulitzer Prize, was "an American master" (The Boston Globe). He was also a prolofic writer of letters, sending as many as thirty in a week.

Benjamin Cheever, the author of four novels and two works of nonfiction, has also been a newspaper reporter and an editor at Reader's Digest. He lives in Pleasantville, New York, with his wife and sons.

Praise For The Letters of John Cheever…

"Wonderfully entertaining.... I felt Cheever's presence in this extraordinary collection. The letters are poignant, stirring one's heart...[and] revealing his perfect honesty about his failings and the frailty of his emotional life." -- The Washington Post Book World

"A unique pleasure, one that even biography cannot fully supply -- that of watching an artist discover and refine his world from month to month.... His letters convince us that we are in the presence of both a great writer and a good man." -- Chicago Tribune
or support indie stores by buying on
Copyright © 2020 American Booksellers Association