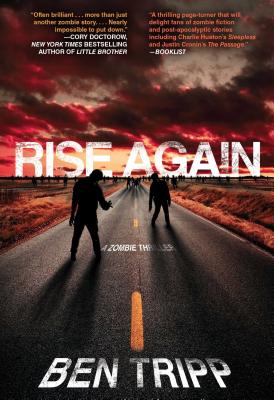 And a warning that would come all too late . . .

Forest Peak, California. Fourth of July. Sheriff Danielle Adelman, a troubled war veteran, thinks she has all the problems she can handle in this all-American town after her kid sister runs away from home. But when a disease-stricken horde of panicked refugees fleeing the fall of Los Angeles swarms her small mountain community, Danny realizes her problems have only just begun—starting with what might very well be the end of the world. Danny thought she had seen humanity at its worst in war-torn Iraq, but nothing could prepare her for the remorseless struggle to survive in a dying world being overrun by the reanimated dead and men turned monster. Obsessed with finding her missing sister against all odds, Danny’s epic and dangerous journey across the California desert will challenge her spirit . . . and bring her to the precipice of sanity itself. . . .

“Often brilliant....more than just another zombie story….Nearly impossible to put down….It does more than scare—it both moves and enrages, and transcends mere spookiness for something much more satisfying.” —Cory Doctorow, New York Times bestselling author of Little Brother

“A thrilling page-turner that will delight fans of zombie fiction and post-apocalyptic stories, including Charlie Huston’s Sleepless and Justin Cronin’s The Passage.” —Booklist

“Danny’s journey through a land of death to find [her sister] Kelley makes for a remarkable character-driven story, and the final sentence takes it to another level.” —Library Journal (starred review)

After attending the Rhode Island School of Design for illustration, Ben Tripp worked as an experiential designer for more than twenty years, creating theme parks, resorts, museums, and attractions worldwide. He is the author of the horror novels Rise Again, Rise Again: Below Zero, and The Accidental Highwayman, his first book for young adults. He lives with his family in Los Angeles.
Loading...
or support indie stores by buying on