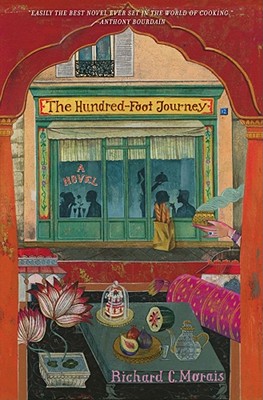 “From India to London to Lumiere - and then, ah, to Paree! - oh, what a great travel tale! And the people - I just loved them all. For foodies, it will be a delicious topping to a cake, and for travel buffs, Great fun to follow the adventures of a large Indian family. It's a delectable read - one to savor and enjoy.”
— Roberta Rubin, The Book Stall At Chestnut, Winnetka, IL
View the List

"That skinny Indian teenager has that mysterious something that comes along once a generation. He is one of those rare chefs who is simply born. He is an artist."

Born above his grandfather’s modest restaurant in Mumbai, Hassan first experienced life through intoxicating whiffs of spicy fish curry, trips to the local markets, and gourmet outings with his mother. But when tragedy pushes the family out of India, they console themselves by eating their way around the world, eventually settling in Lumière, a small village in the French Alps.

The boisterous Haji family takes Lumière by storm. They open an inexpensive Indian restaurant opposite an esteemed French relais—that of the famous chef Madame Mallory—and infuse the sleepy town with the spices of India, transforming the lives of its eccentric villagers and infuriating their celebrated neighbor. Only after Madame Mallory wages culinary war with the immigrant family, does she finally agree to mentor young Hassan, leading him to Paris, the launch of his own restaurant, and a slew of new adventures.

The Hundred-Foot Journey is about how the hundred-foot distance between a new Indian kitchen and a traditional French one can represent the gulf between different cultures and desires. A testament to the inevitability of destiny, this is a fable for the ages—charming, endearing, and compulsively readable.

Praise For The Hundred-Foot Journey: A Novel…

A delicious culinary romp from the beaches of Bombay to the peaks of Paris Haute Cuisine. Very charming and a delight to savor.”
--Padma Lakshmi, author of Tangy, Tart, Hot and Sweet and host of Bravo TV’s Top Chef

"A gorgeous novel, vivid and intimate, tracing a journey from kitchen to kitchen, from culture to culture, with a perfect touch."
--Susan Orlean, author of The Orchid Thief

“A page-turner that captures the extent to which nostalgia and imagination are a part of the craft of cooking, while vividly conjuring the sights and smells of the kitchen. In The Hundred Foot Journey food isn’t just a theme, it’s a main character.”
--Tom Colicchio, Chef/ Owner Craft restaurants

"Cooking and writing at a high level require great passion—exactly the kind of passion Richard Morais has poured into The Hundred-Foot Journey, the story of an Indian boy who discovers he has an extraordinary gift for cooking."
--Michael Ruhlman, author of Ratio: The Simple Codes Behind the Craft of Everyday Cooking

“This tale of restaurant rivalry and a desperate quest for Michelin Stars is beautifully told. From India to France, Richard Morais takes his caravanserai of eccentric characters and mouth-watering recipes on an unlikely journey from the teeming streets of Mumbai to a quiet village in rural France. I have never experienced that most subtle of senses—smell—captured so well in print. The aroma of fine cooking just floats off the pages. Don't read this book if you're hungry. You might eat it.”
-- Simon Beaufoy, Oscar-award winning screenwriter, Slumdog Millionaire

"In The Hundred Foot Journey, Richard C. Morais conjures a richly-woven tapestry of exotic sights, smells and tastes that transports the reader to a world of epicurean delights. This is a charming, deeply felt novel that questions, and ultimately celebrates, the twists and turns of an authentically lived life."
--Elin Hilderbrand, author of Barefoot

"The Hundred-Foot Journey has great charm and is colorfully written, sensual and evocative.”
--Joanne Harris, author of Chocolat

“Precise descriptive writing offers much to savor in this bouillabaisse of a first novel."
--Kirkus Reviews

"Morais delves into a rich, imagery-filled culinary world that begins in Bombay and ends in Paris, tracing the career of Hassan Haji as he becomes a famed Parisian chef. From vibrantly depicted French markets and restaurant kitchens to the lively and humorously portrayed Haji family, Morais engulfs the reader in Hassan's wondrous world of discovery. Regardless of one’s relationship with food, this novel will spark the desire to wield a whisk or maybe just a knife and fork."
--Publishers Weekly

“Hassan Haji’s tone of voice is something of a masterpiece, cosmopolitan but not entirely European either. And the quest for the Michelin stars is a real cliff-hanger. For anyone who loves food, and who cares for character, the book’s a banquet. Lovely stuff. What a superb Merchant Ivory Production movie it would have made.”
–Simon Callow, actor (Four Weddings And A Funeral) and author of Orson Welles: The Road To Xanadu.

"This novel, of mythic proportions yet told with truly heartfelt realism, is a stunning tribute to the devotion of family and food. Bound to please anyone who has ever been happily coaxed to eat beyond the point of fullness, overwhelmed by the magnetism of 'just one more bite.'"
--Booklist (Starred Review)

Richard C. Morais is the editor of Penta, a Barron’s website and quarterly magazine. An American raised in Switzerland, Morais has lived most of his life overseas, returning to the United States in 2003. He is the author of The Hundred-Foot Journey and Buddhaland Brooklyn. He lives in New York City.
Loading...
or
Not Currently Available for Direct Purchase