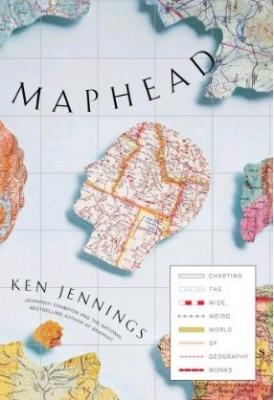 It comes as no surprise that, as a kid, Jeopardy! legend Ken Jennings slept with a bulky Hammond world atlas by his pillow every night. Maphead recounts his lifelong love affair with geography and explores why maps have always been so fascinating to him and to fellow enthusiasts everywhere.

Jennings takes readers on a world tour of geogeeks from the London Map Fair to the bowels of the Library of Congress, from the prepubescent geniuses at the National Geographic Bee to the computer programmers at Google Earth. Each chapter delves into a different aspect of map culture: highpointing, geocaching, road atlas rallying, even the “unreal estate” charted on the maps of fiction and fantasy. He also considers the ways in which cartography has shaped our history, suggesting that the impulse to make and read maps is as relevant today as it has ever been.

“I admit—I’m a geographic klutz, constantly turned around the wrong way. But I never felt lost for a moment inside Maphead. Forget new worlds: Jennings’s charming, witty account reveals a whole other universe.” —Sam Kean, author of the New York Times bestseller, The Disappearing Spoon

“Ken Jennings offers an engaging excursion through the worlds of map making, map collecting, and map use. If you enjoy maps, don't miss it.”—Mark Monmonier, author of How to Lie with Maps

"A literary gem . . . Whether you're a casual cartography ogler or a hardcore geography geek, Maphead will whisk you away into a wonderland that exists where two of the greatest horizons of the human condition, humor and curiosity, converge."--The Atlantic