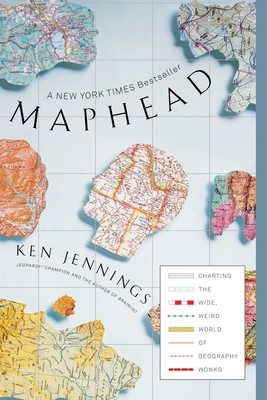 Ken Jennings takes readers on a world tour of geogeeks from the London Map Fair to the bowels of the Library of Congress, from the prepubescent geniuses at the National Geographic Bee to the computer programmers at Google Earth. Each chapter delves into a different aspect of map culture: highpointing, geocaching, road atlas rallying, even the “unreal estate” charted on the maps of fiction and fantasy. Jennings also considers the ways in which cartography has shaped our history, suggesting that the impulse to make and read maps is as relevant today as it has ever been.

“Jennings is a very witty, insightful writer and has written an entertaining and educational book about maps and the geeks who obsess over them.” —Pauline Frommer, travel writer and founding editor of Frommers.com

“It’s a fun read that’s not just for wonks.” —The Salt Lake Tribune

Ken Jennings was an anonymous Salt Lake City software engineer in 2004 when he unexpectedly became a TV celebrity after his record-breaking seventy-four-game, $2.5 million winning streak on the syndicated quiz show Jeopardy! Today, he is the author of thirteen books, including the New York Times bestsellers Brainiac, Maphead, and Because I Said So!, as well as the Junior Genius Guides for children. In 2020, he was named Jeopardy!’s “Greatest of All Time” after winning a primetime tournament on ABC, and in 2022, succeeded Alex Trebek as a permanent host of the show. He grew up in Seoul, South Korea, but for the last fifteen years has lived in his native Seattle with his family and dogs.
Loading...
or support indie stores by buying on