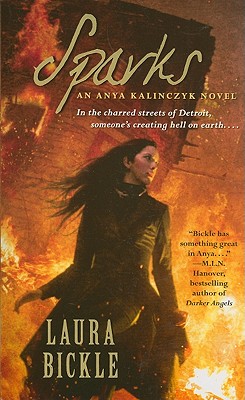 Anya Kalinczyk is the rarest type of psychic medium, a Lantern, who holds down a day job as an arson investigator with the Detroit Fire Department—while working 24/7 to exterminate malicious spirits haunting a city plagued by unemployment and despair. Along with her inseparable salamander familiar, Sparky, Anya has seen, and even survived, all manner of fiery hell—but her newest case sparks suspicions of a bizarre phenomenon that no one but her eccentric team of ghost hunters might believe: spontaneous human combustion.

After fire consumes the home of elderly Jasper Bernard, Anya is stunned to discover his remains—or, more precisely, a lack of them; even the fiercest fires leave some trace of their victims—and she is sure this was no naturally occurring blaze. Soon she’s unearthed a connection to a celebrity psychic who preys on Detroit’s poor, promising miracles for money. But Hope Solomon wants more—she’s collecting spirits, and in a frantic race against time, Anya will face down an evil adversary who threatens her fragile relationship with her lover, her beloved Sparky’s freshly hatched newts, and the wandering souls of the entire city

Laura Bickle grew up in rural Ohio, reading entirely too many comic books out loud to her favorite Wonder Woman doll. After graduating with an MA in sociology–criminology from Ohio State University and an MLIS in library science from the University of Wisconsin-Milwaukee, she patrolled the stacks at the public library and worked with data systems in criminal justice. She now dreams up stories about the monsters under the stairs. Her work has been included in the ALA’s Amelia Bloomer Project 2013 reading list and the State Library of Ohio’s Choose to Read Ohio reading list for 2015–2016. More information about Laura’s work can be found at LauraBickle.com.
or
Not Currently Available for Direct Purchase
Copyright © 2020 American Booksellers Association