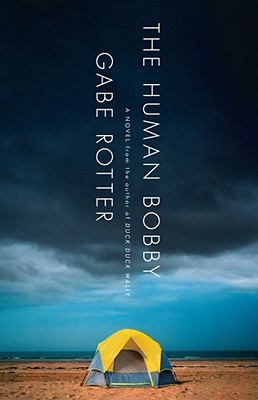 THE GRIPPING STORY OF THE UNRAVELING OF ONE MAN’S SEEMINGLY PERFECT LIFE, AND HIS STRUGGLE TO GET EVERYTHING BACK.

A new baby, a loving wife, a solid career, a dream house in Beverly Hills: Dr. Bobby Flopkowski has it all. Until a complicated series of events snowball into a disaster that changes the course of his life forever.

Now, with a tent on the beach as his only home and an addiction that has cut him off from everyone he once loved, Bobby has a revelation that could put him back on track: he believes he has solved the puzzling crime that led to his downfall. But as the reality he’s always known slips farther away, will he be able to convince someone—anyone—that his suspicions aren’t merely the pleas of a desperate man?

Praise For The Human Bobby: A Novel…

“Gabe Rotter is a clever storyteller and a smart one, too.”
—Chris Carter, writer and creator of “The X-Files”

“I thought I was funny. But after reading Duck Duck Wally I’m not funny at all. Gabe Rotter is.”
—Chuck Barris, author of The Big Question and Confessions of a Dangerous Mind

A native of New York, Gabe Rotter now permanently resides in Los Angeles with his wife and two children. He graduated from the film school at The University of Southern California, and since has worked in television, produced a feature film, penned the novels Duck Duck Wally and The Human Bobby, published a comic book, and is currently a producer on the 2016 reboot of The X-Files on Fox. He has several of his own projects in development for film and television adaptation.
Loading...
or support indie stores by buying on