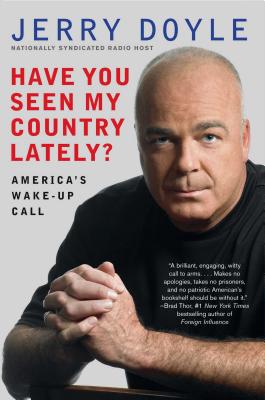 Have You Seen My Country Lately? (Paperback)

"I’ve seen my country lately. Frankly, I don’t like what I see. Nevertheless, it’s not too late to restore the great and unique wonder that is the United States. We are the beacon of hope for the world, and we will remain so as long as we stand up for our principles."

In keeping with his no-holds-barred on-air style, conservative radio talk show host Jerry Doyle has the guts to ask the tough questions about the state of our nation today. In this informative, entertaining, and challenging narrative, he urges Americans to take back the things that make our country great, and delivers his hard-hitting and oftentimes humorous spin on:

• BAILOUTS—the missteps, wrong moves, and rules of salary caps, bank buy-ins, and bonuses that changed from day to day

. . . and much more. If you like your politics straight up, with a commonsense chaser and a shot of dry wit, you’ll be galvanized and enlightened by Jerry Doyle—the man, his story, and his insights into America today.

Jerry Doyle is an American talk radio host, conservative political commentator, and former television star. His nationally-syndicated talk show, The Jerry Doyle Show, which is the 7th largest syndicated radio show and airs throughout the United States on Talk Radio Network. As an actor, Doyle is best known for his role as Michael Garibaldi in the science fiction series Babylon 5. He has raised funds for many charities including Disabled American Veterans, UCLA Medical Center, Breast Cancer, Aids Walk-LA, Cystic Fibrosis and the Motion Picture and Television Fund. He has received numerous awards and accolades including Honorary F-16 Test Pilot, Honorary Naval Aviator and Distinguished Supporter of the Nation's Space Program.

Praise For Have You Seen My Country Lately?: America's Wake-Up Call…

"Have You Seen My Country Lately? is a brilliant, engaging, witty call to arms. If William F. Buckley had George Carlin's sense of humor, this is the kind of book he would have written." -- Brad Thor, #1 New York Times bestselling author of The Last Patriot

"Jerry Doyle is one of the true originals in a media scene marked by contrived sameness. This timely book captures and conveys his crystal clear insights, storybook life experience, and marvelous spirit." -- Michael Harrison, Talkers magazine