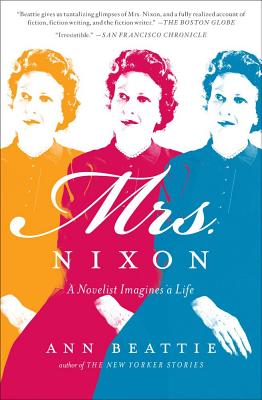 A Novelist Imagines a Life

From the award-winning author The New York Times Book Review called “a national treasure,” a fascinating, wholly original book about Pat Nixon that is also “a fully realized account of fiction, fiction writing, and the fiction writer” (The Boston Globe).

The rare First Lady who did not write a book, Pat Nixon remains one of the most mysterious and enigmatic public figures in recent history. Ann Beattie, like many of her generation, dismissed Richard Nixon’s wife. Decades later, she wonders what it must have been like to be married to such a spectacularly ambitious and catastrophically self-destructive man.

Beattie uses the elusive persona of Mrs. Nixon to examine how writers create characters, how they use detail, and what drives their storytelling. Like Stephen King’s On Writing, this fascinating and intimate account offers readers a rare glimpse into the imagination of a writer.

A startlingly compelling and revelatory work, Mrs. Nixon is an insightful and humorous examination of the First Couple who occupied the White House as the baby boomers came of age.

Praise For Mrs. Nixon: A Novelist Imagines a Life…

“Beattie gives us tantalizing glimpses of Mrs. Nixon, and a fully realized account of fiction, fiction writing, and the fiction writer.”—The Boston Globe

“Beattie captures something familiar in Pat, making us care about her.” —Barbara Liss, The Houston Chronicle

“A fascinating look at the writer in her workshop.”—Alan Cheuse, NPR’s “All Things Considered”

“Beattie writes insightfully and with contagious excitement of the artistic process and offers remarkable analysis of the world’s literary greats…Her respect for them is a beautiful thing to behold.”—M.E. Collins, Chicago Sun-Times