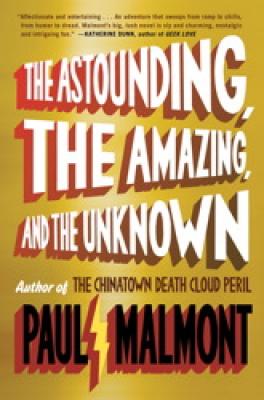 The Astounding, the Amazing, and the Unknown

Based on an incredible true episode of World War II history, Paul Malmont’s new novel is a rollicking blend of fact and fiction about the men and women who were recruited to defeat the Nazis and ended up creating the future.

In 1943, when the United States learns that Germany is on the verge of a deadly innovation that could tip the balance of the war, the government turns to an unlikely source for help: the nation’s top science fiction writers. Installed at a covert military lab within the Philadelphia Naval Yard are the most brilliant of these young visionaries. The unruly band is led by Robert Heinlein, the dashing and complicated master of the genre. His “Kamikaze Group,” which includes the ambitious genius Isaac Asimov, is tasked with transforming the wonders of science fiction into science fact and unlocking the secrets to invisibility, death rays, force fields, weather control, and other astounding phenomena—and finding it harder than they ever imagined.

When a German spy washes ashore near the abandoned Long Island ruins of a mysterious energy facility, the military begins to fear that the Nazis are a step ahead of Heinlein’s group. Now the oddball team, joined by old friends from the Pulp Era including L. Ron Hubbard (court-martialed for attacking Mexico), must race to catch up. The answers they seek may be locked in the legendary War of Currents, which was fought decades earlier between Nikola Tesla and Thomas Edison. As the threat of an imminent Nazi invasion of America grows more and more possible, events are set in motion that just may revolutionize the future—or destroy it—while forcing the writers to challenge the limits of talent, imagination, love, destiny, and even reality itself.

Blazing at breathtaking speed from forgotten tunnels deep beneath Manhattan to top-secret battles in the North Pacific, and careening from truth to pulp and back again, The Astounding, the Amazing, and the Unknown is a sweeping, romantic epic—a page-turning rocket ship ride through the history of the future.

Praise For The Astounding, the Amazing, and the Unknown: A Novel…

“A rollicking adventure . . . Great fun . . . The Astounding is the very definition of a page-turner.” —The Onion A.V. Club

“Delightful . . . Madcap . . . It’s so much fun that it virtually defines what light fiction should be.” —Library Journal (starred review)

"A 1940s adventure story, full of historical characters and breathtaking near-escapes, this novel will appeal to the little boys in grown-up readers." —Newark Star Ledger

“Paul Malmont launched his affectionate and entertaining secret history of twentieth-century American pulp fiction with The Chinatown Death Cloud Peril in 2006. The Astounding, the Amazing, and the Unknown is the second novel in this sequence, and the focus turns to famous science fiction authors including Robert Heinlein and the young Isaac Asimov. Together they tackle the mysteries of Nikola Tesla and winning World War II in an adventure that swoops from romp to chills, from humor to dread. Malmont’s big, lush novel is sly and charming, nostalgic and intriguing fun.” —Katherine Dunn, author of Geek Love

“Paul Malmont’s whirlwind novel celebrates the grand era of science fiction by taking its legendary writers as characters in a wholly original romp through WWII-era technology and intrigue. The Astounding, the Amazing, and the Unknown beams its readers right into its world with all the dazzle of a newly uncovered and improved Tesla transmitter.” —Matthew Pearl, author of The Dante Club

“Watch out, Earthlings! The fathers of science fiction are on the prowl again, trying to save the world from the Nazis in Paul Malmont’s delightful romp. The Astounding, the Amazing, and the Unknown delivers thrills, laughs, intriguing speculation, and even a little romance—much like the best sci-fi. A treat!” —Kevin Baker, author of Strivers Row and Paradise Alley

“A wild trip . . . Malmont lovingly embraces the fact-fiction synthesis employed by the writers he brings to life . . . Fans of the original pulps will surely enjoy the ride.” —Publishers Weekly

Paul Malmont works in advertising. He lives in New Jersey with his wife and two children. Please visit the author at www.paulmalmont.com. You can follow his blog postings at amazon.com or on Facebook.
Loading...
or
Not Currently Available for Direct Purchase