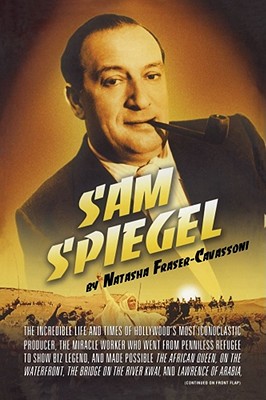 The Incredible Life and Times of Hollywood's Most Iconoclastic Producer, the Miracle Worker Who Went from Penniless Re

The incredible life and times of Hollywood's most iconoclastic producer, the miracle worker who went from penniless refugee to show biz legend, and made possible The African Queen, On the Waterfront, The Bridge on the River Kwai and Lawrence of Arabia, not to speak of many more, including movies as distinct as Suddenly, Last Summer; Nicholas and Alexandra; The Last Tycoon; and Betrayal; all of them sharing the unique vision that earned Spiegel twenty-five Oscars: star-filled, bigger-than-life, conceived on a vast scale, intensely dramatic, and overwhelmingly ambitious. In this rich and brilliant biography, Natasha Fraser-Cavassoni, who had the advantage of knowing and working for Spiegel, brings into sharp focus a Hollywood legend who was at once crafty, unscrupulous, mendacious, and equally capable of great charm and petty meanness, who was sentimental and ruthless, a shrewd judge of talent, a gambler on a colossal scale, a man of almost unique artistic vision and courage who was, in the final analysis, that most elusive and rare of movie producers, a genius. The story of a how a Jewish refugee without a penny to his name managed to produce several of the greatest films of all time is alone worth telling, but Natasha Fraser-Cavassoni has done more; she has drawn the definitive portrait of the man himself -- the elusive, witty, cynical adventurer who, like so many refugees, was able to live, succeed, and raise money everywhere, but who was at home nowhere. Spiegel surrounded himself with luxury and beautiful women but remained a loner despite his countless friends. Spiegel was mysterious about his origins, prompting Arthur Miller to refer to him as The Great Gatsby. In reality, he was born of middle-class Jewish parents in the last years of the Austro-Hungarian Empire. Raised in Jaroslav, in western Galicia, Spiegel left home in his late teens and quickly became a hero of the Hashomer Hatzair, a Zionist youth movement. Step by step, with immense research and a vast number of interviews, Natasha Fraser-Cavassoni recreates the world of Sam Spiegel's childhood and youth, separating often self-serving fiction from fact. She follows Spiegel's dramatic flight from the Nazis in Berlin, a prison sentence in London, problems with the police in Paris and Mexico City, and finally his arrival in Los Angeles. In America his career languished for a time, though he acquired a reputation for being a supreme fixer, a brilliant luftmensh on the fringes of Hollywood power, the ultimate party-giver who knew everybody's secrets and was always quick to charm women and take advantage of men. Billy Wilder called him a modern day Robin Hood, who steals from the rich and steals from the poor. With a brilliant sense of time and place and a deep understanding of Spiegel's complex personality, Fraser-Cavassoni traces his disasters, successes, romances, friendships, and tangled finances in a narrative that is rich with colorful Spiegel stories, scandals, and bon mots. The cast of characters in Spiegel's life includes Lauren Bacall, Humphrey Bogart, Marlon Brando, Montgomery Clift, Robert De Niro, Barry Diller, David Geffen, Katharine Hepburn, John Huston, Elia Kazan, David Lean, Joseph L. Mankiewicz, Mike Nichols, Harold Pinter, Otto Preminger, Elizabeth Taylor, Gore Vidal, Orson Welles, Billy Wilder, Darryl F. Zanuck, bevies of beautiful women, three wives, countless members of high society, and, most important, Sam Spiegel himself -- the last of the great independent film producers who, in the swashbuckling tradition of David O. Selznick and Sam Goldwyn, operated alone, aimed high, and believed, above all, in their own star. pard More than a major book about the movie business, Sam Spiegel is an intricate and engrossing biography, comparable in its richness, depth, and attention to detail to A. Scott Berg's acclaimed biography of Samuel Goldwyn. It is a marvelous, once-in-a-lifetime reading experience and an astonishing debut for Natasha Fraser-Cavassoni.

Natasha Fraser-Cavassoni, currently the European Editor for Harper's Bazaar, and formerly a staff member and journalist at Women's Wear Daily and W magazine, began her career as the company assistant on Spiegel's production of Betrayal in 1982. She lives in Paris with her husband and two daughter
or support indie stores by buying on
Copyright © 2020 American Booksellers Association